CAN YOU TELL WHAT IT IS YET?

If you have ever listened to the show you will know how much of a fan of cartoons I am.
No idea where the love of them came from. Probably a long childhood spent watching Tom and Jerry, Roadrunner and Quick draw McGraw. (Sorry no Disney, too twee.) That and comics. Although teachers frowned on The Beano & Dandy in favour of Look and Learn and the Eagle. Who can forget The Trigon Empire? Although I never understood the sci fi premise of spaceships, ray guns and blokes riding around on horses like Romans amidst all this. Then Dan Dare's nemesis The Mekon who ruled his people "The Treens" with a rod iron whilst whizzing around on a floating bidet with no backrest.

I even ripped off another kid’s idea and sent it as my own work in an attempt to "Make Buster laugh" A native American man and woman facing each other across a ravine. The caption being "How?" If you must know, Buster didn't laugh and I never received my ten shillings.


What has this got to do with my current life? Clive Goddard is a well respected and very successful cartoonist and finds working at night a help to meet deadlines. He likes the radio for company. Notably Radio 2 and The Best time of the day show. We have emailed each other off and on over the years and he invited me to meet him for the first time at the Shrewsbury Cartoon Festival. As I was up that way it was an offer I couldn’t refuse. It is about ten years since I visited Shrewsbury which is a beautiful place, a lot of work looks like it has been done since my last visit and in the Market Square was a marquee housing several well known cartoonists busily making art with a Darwin/Science theme as Shrewsbury was Darwin's birthplace. I had a brief chat with another favourite of mine Martin Honeysett who actually resembles some of his characters. Bestie was there as well but hadn't turned up by the time I went into the wonderfully renovated Market Hall (built in 1596 but it has electricity and everything). Clive had kindly blagged me a ticket to listen to a talk by one of my cartooning idols Steve Bell from the Guardian. Whatever your politics he does the most wonderfully intricate and surreal cartoons as well as capturing the essence of politicians: George W Bush as a monkey, John Major with his underpants outside his trousers as a rotten superhero & Tony Blair with a manic eye, a feature he shared with Margaret Thatcher. Gordon Brown's mighty lower jaw, John Prescott as a dog called "Market". Not to mention penguins and a short-sighted French whale with an overactive libido and a penchant for mounting submarines! It was fascinating listening to him talk about how he builds a character and how sometimes he can't "get" someone and how frustrating it is until something clicks. In the case of Barack Obama it took a fellow cartoonist to point out his luxuriant eyebrows. Libby Purves was patron and introduced Steve Bell. Odd - I had only seen her a few weeks ago getting into the car in front on a cross channel ferry. Small world. 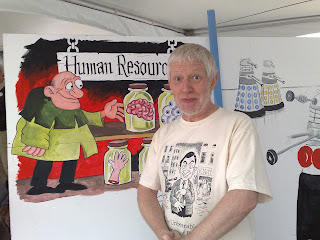 Last year I blogged about a fantastic gig I had been to. The Zombies had reformed to perform their "Odessey” (sic) and Oracle album to mark its 40th anniversary. It was such a success they decided to do it again, er 41 years on at a slightly larger venue promising this was the last ever ever ever. They were wonderful and the record holds up so well even after all this time with some wonderful harmonies. Last time I went with Libido Boy but this time I took TV Trish. She was well impressed , despite the juggling act we had to do with the drinks - no booze outside so I had to hang on whilst she rushed out for a gasper, left holding the rapidly warming beers in the plastic cups. The DVD of the 40th anniversary gig is out now, Rod Argent disarmingly mentioned from the stage at one point. Well they never did get the recognition and the cash rewards they deserved. The closest thing they got to Beatles-like success was er, using Abbey Road studio and their new fangled 8 track just after the Fab four had finished Sgt Pepper. I know which album I prefer. 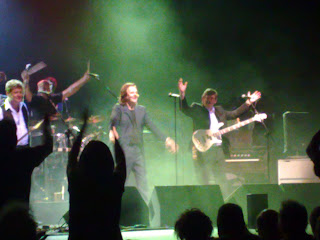 I have found that (c)is usually the one that sorts out the abbynormals from the boring (naturally I am looking for an abbynormal)- somehow most seem to accept the fish people! Theories gratefully received (chocolate and real ale even better)