'SEEN ONE. DONE ONE'

Been away for a week so sorry, I have not posted. Spent a really nice week not doing an awful lot and catching up with friends, food and drink which, I think, is a good way to spend a holiday. Went to France for a few days which meant I was suddenly very popular with other friends and work colleagues. A fair number of texts arrived starting with the words: "As you are in France, I just wondered if you could...."

As such, I came back with the car laden with champagne, red wine, cheese and chocolate. None of which was destined for my stomach. Still happy to oblige in these credit crunch times.
It also rained a lot which didn't matter just spent a lot of time indoors watching DVD's.

Series 2 of ‘Curb your Enthusiasm’

All of which I enjoyed and....

Also, I only had time to re-acquaint myself with the beginning of ‘Bagdad Café’, which I saw twenty years ago at the cinema, and had forgotten the wonderful haunting opening sequence with the song "Calling you" by Javetta Steele being played over it. So terrific was the tune that when I got back, I dug it out and played it on the show as part of ‘Lester's library’.

Before I went away, I had a chance to visit a venue that I’d not been too before – The Forum in London's Kentish Town, with a friend to see Todd Rundgren. 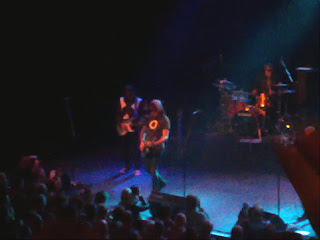 He is 60 and looks ace. He was very energetic and played a lot of terrific guitar, far more than I expected. It was a cold night, but warmed by a good boozer next door to the theatre. The place was packed with hard core Rundgren fans, including a selection of shaven headed middle aged fat blokes who had started the Xmas celebrations early.

They were uber fans who knew all the tunes. Or maybe they were just overexcited and refreshed? Every time he started a song, they would leap to their feet and scream and shout and applaud wildly. So, the view for us short types sitting down, was always blocked for the opening verse of each track. I did wonder at one point if I should say something but then thought: "a small man and an even tinier woman remonstrating with drunken lairy big blokes?” It seemed a bit of an unequal match, so I decided that seething silence was the best course of action. I did find myself wondering if it was possible to buy a Taser from a nearby hardware shop to ‘zaap’ them into a less exuberant state.

It being a Sunday night meant that I only managed a couple of hours sleep before the show the next morning, so I started with the week a mite bleary eyed. I find that providing I don’t attend too many weekday gigs, ‘Doctor Footlights’ will see me through the next days show, and luckily I can usually go back to bed again by about 7 in the morning to catch up.

I’d forgotten that Monday was ‘going to see the family day’. After the show, I hopped onto a train to the Midlands and, 2 hours later this crazed, wired, jetlagged figure tottered into my dad’s house, babbling nonsense to him, my sister and brother in law, before staggering back to the railway station again. I went to bed earlier than usual and, unsurprisingly, slept very well.

It must be an age thing as I can still remember that as a student I was terrible with late nights so was worn out by about 11pm and then would find it more or less impossible to get out of bed before noon the following day. How things have changed. If I manage 5 hours without waking I am doing well.

Sometimes sleep (and perhaps you find this too), is difficult if you have something on your mind. I had:

The Friday before my holiday, I’d been very kindly invited to present the legendary Radio 2 show, ‘Friday Night it Music Night’, live from the Watford Coliseum by the producer Terry Carter - my old mate from Birmingham. A man with ‘reckless’ obviously written through him, like a stick of Blackpool rock! A man who is ‘Mr Music’, and whom I can wind up very easily by calling him ‘Dr Jazz’, as he’s a walking musical encyclopaedia and long time producer of the much missed Humphrey Lyttleton show.

During the late 80's and early 90s I did quite a lot of concerts for Radio 2. So many in fact that I realised it was a false economy to keep hiring a tuxedo from Moss Bros. So, at the end of one series of shows, I bought an ex-rental evening suit for £30. It was passable and the only blemish was a cigarette burn in the back of the trousers. After proudly hanging it up in my wardrobe I never did another concert. Until now that is. It still fitted although the fag burn hadn't healed. 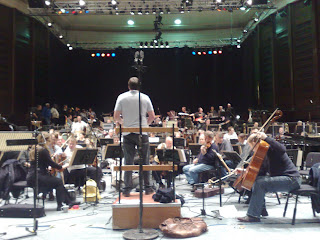 The show with the BBC Concert Orchestra featured the music of George Fenton who was a name I knew in connection with film scores. It was only when I arrived at the venue and we did a run-through in rehearsal, that I realised what a superstar the man is. ‘Ghandi’, ‘Cry Freedom’, ‘Shadowlands’, ‘Groundhog Day’. The list went on and on. And he’s written a load of TV stuff including ‘Bergerac’. The guy isn't even 60 - how he’s had time to even eat I have no idea as so much music has been pouring out of him. He’s a fine musician as well and he had his own band with him to perform some of the tunes.

The presenters job is to babble in between the pieces, telling the audience in the theatre and at home a bit about the music, and also to give everyone in the band time to turn their music over. Or in George's case, to leg it from the front of the orchestra to the back where he sat with his own group. This is a whole different ball game to what I am used to which is sitting in my comfort zone in the studio in the middle of the night.

First off I had to stand at the front of the 60 piece Concert Orchestra. People could see me. They were within missile hurling distance.

When the music was on I would sit at the side of the auditorium studying my finely honed script very carefully. It’s a far more formal way of doing things than just fooling around as we do with the ‘Best Time of the Day Show’. It reminded me a bit of my time as a TV announcer. Again a different discipline. You had 20 seconds to speak. If you cocked it up you then had 2 hours to sit and seethe at your own inadequacies whilst the film was on.

Surprise, surprise! Somehow it passed of without a hitch. The music was wonderful and a few members of the audience came up to say “Hello” and how much they had enjoyed it. This was far better than the last concert I did, which was from the Golders Green Hippodrome. As I recall, after the show a couple of elderly gentleman collared me. I assumed they wanted to chat to me and to tell me how fantastic I’d been. Possibly they wanted an autograph as well.

just catching up with everything. You have been busy! Ah the old suit out again- now the reason for your haircut becomes clear.. :)

Way back when, when I was a sprog, my Dad and I used to go to 'The Forum' on a Saturday afternoon. It was a cinema in those days. We'd watch the 1st picture, and then in the interval, Dad would leave the cinema, pop next door where the best fish and chip shop in Town was located, and get us fish and chips, come back in the the cinema and we'd tuck in whilst watching the 2nd film. Umm. Thanks for the memories, Mr L.