OK so it’s four weeks before Christmas or "Winterval" if you prefer. Already we can see the signs. Ignore all the music in the shops and those horribly smug ads on the TV with members of Take That,Twiggy and that woman with the corkscrew hair that doesn't appear to possess anything to wear other than underwear. We are beginning to reap the rich rewards of people getting festive. This is usually expressed by the adoption of fancy dress.

This is just a way of getting a picture of top producer Andy who along with Simon has to suffer the seemingly endless torment of working with me first thing in the morning. It is a rota thing so whilst one is in the studio staring at me and willing me to burst, the other is in the office rocking slowly back and forth …being counselled by their co-workers.

Whilst I was temporarily filling in the Saturday evening 9-11pm slot for the last three weeks (and thank you for all your kind comments, by the way) Andy was on a credit crunch night out exploring a new "theme" restaurant. His friends had invited him to the opening night of a new Mexican place….it turns out was their place! When Andy and his wife turned up they were handed a hat and a moustache each. For some reason Andy's' wife decided not to be photographed in her sombrero and 'tache. 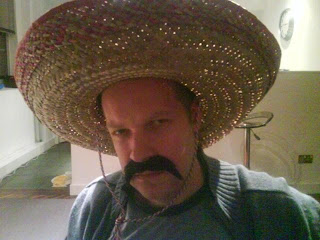 This prompted a thread on the show as so many things tend to. From what I remember we ended up designing the perfect low budget evening in. Which may or not involve some dressing up. Lets face it - it is what we Brits do best. Panto season will soon be upon us. Up and down the country people who once appeared in "Home and Away" or "TV's Love thy Neighbour" are gearing up for their biggest earner of the last 12 months as "Baron Hardup", "Widow Twanky" or "Wishee Washee".

Having given you a convoluted reason for a rather fine picture, here are two more. Once a year for the last we reckoned five years, the Reverend Andy who you can hear doing "Pause for Thought" on the Sarah Kennedy show and the wonderfully committed volunteers invite me to open the St John’s Church Arts and Crafts Fair. There are a multitude of reasons for this. From my point of view it is a chance to meet some excellent folk and ingest some of the finest sandwiches and cake you will find anywhere. From the good Reverend's perspective it increases the size of his flock by one. He is of a mind that if you turn up to church regularly you are part of his congregation. I turn up once a year so that makes me regular enough for him. That is top thinking! 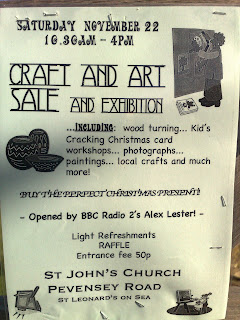 Whilst I was looking at the stalls I noticed the first sighting of "Antlerwatch" for the 2008 season. Fran Courtney who is a potter, and makes some amazing stuff using leaves as templates, decided to brighten proceedings by donning a pair of fake antlers. It must be stressed here that in reality she would not qualify for "Antlerwatch". We will be posting the rules on the website round about December 8th when the campaign starts in earnest. In a nutshell it is the fallout from office parties which involve drunks wearing flashing antlers weeping or arguing into their mobiles whilst clutching a shoe with a broken heel with the other hand. Although I didn't check her shoes, she had no visible cell phone and was stone cold sober. 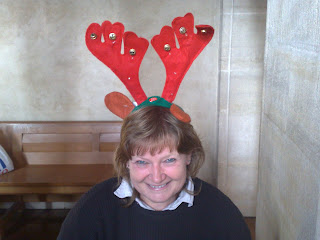 Whilst chatting with a number of people I noticed a familiar face in the crowd. "You may not remember me" he said. It is difficult to place some people out of context. "I am your Doctor". Luckily I don't see him very often. The last time being five years ago. We are of similar age so whilst people were glugging coffee and sticky cakes and rich sandwiches, we started chatting about statins and prostate checks. He admitted that he wasn't on statins but perhaps he should be. I wondered how he checked his prostate. Was he a contortionist with maybe a mirror AND a glove? "I get my Doctor to do it" Ah …yes of course! So I may pop by his surgery for a once over at some point. I can assure you of one thing: That is a picture that isn't going to turn up on any website!

Whilst on the subject of campaigns, the 2008/2009 truck-writing season is going very well. I think it is going to be our most successful year to date. In previous years we have, when the dirt on vehicles has softened, encouraged people to write our nonsense slogans to spread the word about the show. In the past we have had "Slap My Top" and "Boloxnia or Bust" which have spawned successful websites. (The links to them are available from my page on the R2 site)

This year we have gone for two. Since a furious listener described me on the Ken Bruce show as a "Swirling cesspool of filth" after a couple of mild remarks about commercially available cocktails (of the type that lead to Antlerwatch so Drinkaware - wow this blog fits together like a jigsaw) it was decided the acronym S.C.O.F would look good on the back of trucks along with "Seek the Dark", we are getting dozens of reports from all over the country. This is most heart-warming so thank you and keep up the good work. We hope to start adding pictures to the Radio 2 website on this theme fairly shortly.
Posted by Alex Lester at 07:32

No photo of you with you new hair style!!!! Is that the reason you had it cropped??? So that the antlers will fit better???????

On the other hand - apart from the four fingers and thumb, you were starting to look like an explosion in a mattress factory... :)