After the excitement of last week’s blog and the proposal, which was luckily accepted by the Dark Lady, can I start by saying we are both very touched by all your kind messages and your good wishes.

As far as the logistics are concerned, we are thinking of setting a date at the tail end of next year, probably early December. We are going for low key.

This is a mutual decision and not one suggested by myself in an attempt to save money.

Since we met, the DL has weaned me off buying the cheapest packets and tinned goods at the supermarket without going crazy and feasting on Panda Caviar with endangered double-organic chocolate pudding to follow.

She has a point. A cup of tea now seems to taste better in our house and "ACME Tuna flakes" are probably better suited as cat food. In fact some years ago when I lived on the Blue Pig - my canal boat on the cut in Birmingham - I used to buy 24 cans of the aforementioned tuna flakes at a time and on one occasion a woman sailed past with an identical selection and stated "I've got my cat food" whilst I thought "I've got MY food". 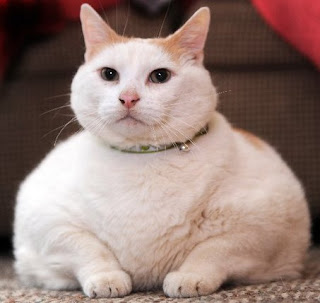 Low key means that the His and Hers thrones a la Beckhams are out. As is the hiring of a Scottish castle like Madonna. However, a mild and only partially serious suggestion of a quick trip to Las Vegas and a quickie Elvis jobbie met with a flat refusal.

So there will be something in between although for the moment we are not fixating on it.

OK and Hello magazine have been very quiet as well, so we think it is unlikely that we will be able to offset the cost with a massive advance from a glossy magazine.

My mate Matthew Rudd of Nerd Night fame suggested we did a Johnny Vegas and sell the pics to VIZ for the princely sum of a pound or maybe some other magazine that doesn't usually print wedding pics.

Right back into the show and life after getting back from New York and we hit the snow.

Had intended to head off to Hastings leave the car there and travel back by train. Luckily last winter’s memory has not faded of a similar attempt. Slipping and sliding down the A21 past abandoned cars and then upon reaching the railway station seeing the word "Delayed" on the indicator boards. What the train people actually meant was "Cancelled". In fact at the end of the day no trains had run at all. This is where memory fails, but I think we were herded onto coaches and taken to Tonbridge Wells where we were left for hours in the freezing cold as no trains arrived until we were herded onto another coach to take us up to Tunbridge where we eventually managed to find a chuff-chuff that actually was able to move. 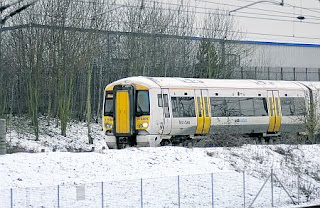 If we are starting to have these winters again on a regular basis after decades of mild ones hopefully public transport will take this into account and make plans accordingly.

Relatives of mine who relocated to the beautiful North Yorkshire countryside are now thinking of moving again as they have been snowed in for days for the last two years. Last week there was five feet of snow drifting up against their garage door. So heaven knows how you must be suffering further north than them.


As we are heading at a dizzying pace towards Christmas I have been out buying and wrapping gifts for the DL, her children and my family. 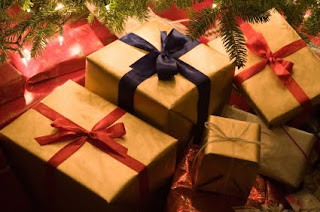 I actually enjoy the process of deciding and sourcing gifts for people. I have read that it is about giving the person something they would like rather than giving them something you think they ought to have or just.... something.

We know that petrol station gifts don't cut it. Clothes are tricky unless it is something that the person really likes and admires. It is a minefield in case it is perceived as an attempt to "smarten someone up". A tweet came in last week suggesting that as I was getting married that perhaps I should cut my hair short and shave off my beard.

I don't understand the logic as if I did that I wouldn't be the person the DL knows. It was she who suggested I kept the beard which I grew on American Adventure 3 last summer and anything that gets out of the daily chore of shaving at 01.00am is good with me.

You may as well say to someone: "You know George, I think I would prefer it if you changed your name to Darryl. I think it suits you better"!

Am now ahead of the game, although I can feel a little smugness and inertia beginning to kick in. I have bought gifts for my family and the DL and her daughter, Ella. Although not got anything for her son Jamie yet.

(Jamie don't worry you are not going to be "the little boy that Santa Claus forgot”. However, you can forget the Bugatti Veyron for two excellent reasons: 1) I am nowhere near rich enough for a car like that. 2) You are not old enough to drive for another 6 years so it would just gather dust out in the street).

All is needed now is that last couple of presents. All the others have been wrapped.

Then it is the annual cheese run as every year; since my Mother died, my Sister and Brother-in-law have taken over Christmas Day duties which they are brilliant at.

My sister does the food. My Brother-in-Law, John, does the washing up (although they now have a dishwasher so his duties may be lighter this year). My Dad brings the wine, and I over-cater in the cheese and biscuits department.

I am having a two-centre holiday this year as I will be with the DL and her family Christmas morning, then my Sister and Brother-in-law for the day, and then back to the DL place for the evening and more eats.

Remember Henry Kissinger? The politician who invented "shuttle diplomacy" back in the70's?

This is the festive version which is frankly a lot more fun, although it does involve some travelling, but hopefully far less arguing and stress. 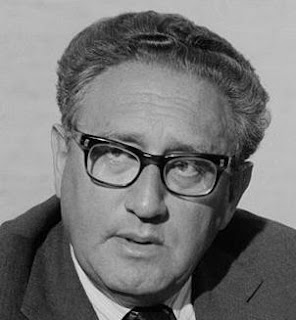 Now all I need to do is the Xmas cards.


Don't forget you can follow me on Twitter, just click here, and - using the same login - you can hear me on Audioboo by clicking here?
Posted by Alex Lester at 14:41

Good for you Alex!!
Christmas spent with those you love and care for is the BEST! and even if that means a little traveling then so be it.
Sounds to me that you have all bases covered, and what a great sister and b in law to have!!!
I do however think you are mean not to get the poor lad the Veyron. (meanie) My best to you and the bride to be!
Les

Hi Alex,
Just caught up with the blogs. Belated congratulatioins to you and the DL. May you have many years of happiness

Thank God for that.