18 WHEELS AND A DOZEN ROSES

Sorry for the lack of blog type communication over the last couple of weeks, but I was ministering to the Dark Lady who - having been laid low by a prolapsed disc in her neck - has been in hospital on huge amounts of pain killers until the Doctors decided it was best to operate.

This is not something to be undertaken lightly. You don't really want anyone messing with your spine, especially not in your neck. You can imagine all the horrible thoughts that want through our heads.

Then the night before the op there was the consent form to sign. This listed all the possible complications. These were far worse than the ones our overactive imaginations had already listed.

Up to that point, the care had been spectacular and the staff wonderful. Nothing was too much for them.

The DL was then transferred to another hospital to be prepped for surgery. We were told it could be 8 hours in theatre. So with me telling her as she was in theatre she was the "star", I left them to it and went home and stared at the wall. Four hours later the phone rang and she was back on the ward.

The Neuro Surgeon had done an excellent job. The terrible agonising pain had all but gone. She could wiggle her toes and move her hands and had a small dressing on the front of her neck where they had gone in to remove the disc. However, she had been left with a very wheezy voice which is a cross between Marge Simpson and the old guy from The Dick Emery Show. 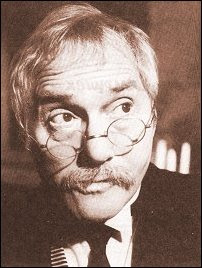 Next day, however, things rather deteriorated. We had been aware of someone in a ward nearby who seemed to be channelling the late Senor Wences and his puppet, Pedro. Ironic really, bearing in mind the potential horrors of the operation was a head in a box. 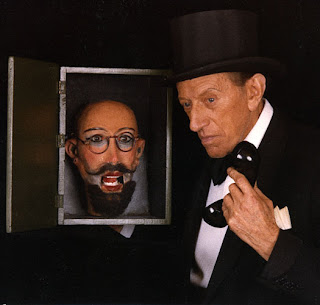 The patient and the nursing staff went through the whole

"Close a the door pliz"

The surgeon had told her she could go home within 24 hours of the operation. DL felt too wiped out to go so opted to wait a couple of days.

After the umpteenth time, the staff tried to change the dressing and failed to remove the sterile film from it correctly so it wouldn't stick. One time there was even a search to find a wound on her back to dress that didn't even exist.

"No, its not you had spinal surgery...it’s at the back"

"The Surgeon went through the neck"

"How am I supposed to know? I am not a surgeon!" (followed by a lot of wheezing).

Food was interesting too.

DL decided to discharge herself 24 hours early fearful for what they would do next. 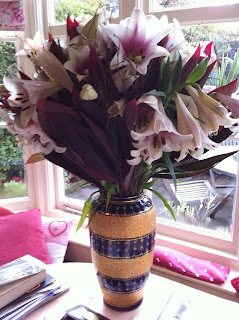 One thing that was evident was the care and good wishes from you, friends and family.

Barely an hour went by without another bunch of flowers being delivered. At one point I was dispatched to the Nursing station with a large box and told:

"Please take these off us.....we can't manage any more chocolate." 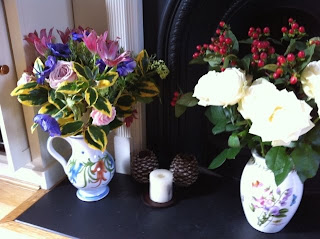 DL loves flowers and said it was like a florists.

I am not so struck due to the overpowering smell and so think…Undertaker! 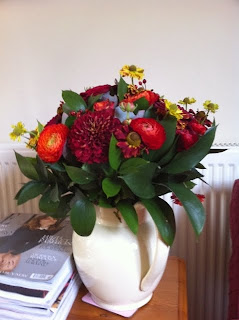 She is now at home and still has a wheezy voice which is slowly getting better. The pain is there but is nowhere near as bad and hopefully will go completely soon.

She has been very brave and rises more in my esteem everyday.

Life is sort of getting back to normal. 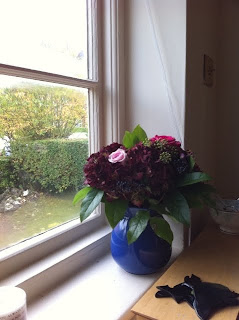 Susan the Finance (Don't hate her, she is not a Banker) and I went off to the Radio 2 Electric Proms last week to see Elton John and Leon Russell. Susan will always be someone who I am indebted to as she introduced me to the DL in the first place.

Elton came on and ran through a few of his songs hits and album tracks and introduced Plan B who did a rather strange version of “I Guess That’s Why They Call It the Blues”. Susan and I looked at each other!

Then it was Leon's turn. We were sitting on the far side of the auditorium from him so all we could see was a shock of white hair and beard, dark glasses and a piano. Some very acceptable noises came out of the speakers but we weren't sure if was actually real; he could have been a dummy. 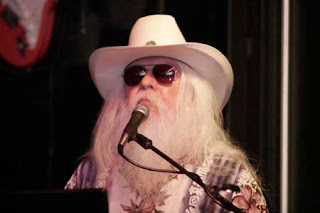 Rumer came on and did a cracking version of "This Masquerade"

Then it was back to Elton who announced they were going to do the whole of The Union album they have just made; a former Radio 2 Album of the Week. Track by track and in order.

I like the record but it is a bit heavy going listening to 14 songs from a CD which is new and largely unfamiliar.

By the time they got to "Never Too Old (To Hold Somebody)” Track 13, Susan looked at me and I looked at her and we headed for the exit. 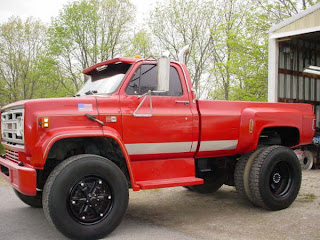 After waiting a while longer than normal on the show and with increasing numbers of inquiries from you, Dr Strangelove and I decided it was time to kick off the 2010/11 Truckwriting season.

We opened it up to you and in came the suggestions.....all inventive. Many too rude to broadcast!

Steve the Cabbie came up with the one that we deemed most appropriate:

You are and I thank you for that. Long may we all continue.

Sightings have already been reported which is excellent thank you.


Plus, let me play you a song! Think of a song you haven't heard in ages, maybe a rare album track you think we would like to hear or a song that reminds you of a particular time in life, maybe make a dedication, or request a song you just love to sing out loud to, or one that will have us all LOL-ing. Visit here to do so, I look forward to hearing what you come up with.
Posted by Alex Lester at 17:42

Glad to hear things are better with the Dark Lady. My wife had a similar operation five or six years ago, and it has made a huge difference to her. Even the small scar on her neck is barely noticeable now. Hope all continues to go well.

Hi Alex, nice to see you back blogging. The flowers look lovely (so do DrS's fotos; flowers, particulalry lilies, can be overpowering but v.nice of people to send them. "Wallop" sounds great, I will look out for it on trucks - and if appropriate might even write some on particularly dirty van/lorries if I can get away with it without being seen:)- and yes, we are all lovely overnight people.

most pleased to hear of the success of the Dark Lady and her op. =)