DON'T LAUGH AT ME BECAUSE I'M A FOOL

Been a sad, disappointing and poignant week for a number of reasons this week.

Friday night, the Dark Lady and I went off to the O2 in London's Docklands to see Santana.

As I said on the show and via Twitter, I have been waiting to see them/him since I borrowed my sister’s copy of Abraxas back in the very early 1970's.

Never been to the main bit of the O2 before so was looking forward to it immensely.

You may remember a few years ago (when it was known as the "Millenium Dome") it was branded a white elephant and a waste of taxpayers money and politicians and tabloid newspapers queued up to put the boot in. How things change and now I gather it is the most popular and successful music venue in Europe.

The band were due on stage at 8pm so there was time for eating and a quick drink. Lines of people stretched along the malls between the restaurants and bars. This was not good.

DL has been here loads of time so she knows the drill. "Won't take long, we will be eating in no time" she said, as we joined the throng outside a burger emporium.

My face was obviously telegraphing my feelings as it took on its "petulant child" expression.

You may think this is not a very nice trait; however, to my way of thinking, it explains my youthful good looks!

She was right. I was wrong. Within five minutes we were at our table. 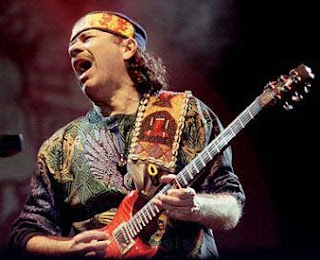 8pm sharp on came the band with minimum fanfare as they immediately created their own.

Drums, Congas. Timbales. The band were a percussionist’s dream. They thundered along and very occasionally - to my untutored ears - we would get a tune we recognised. "Smooth”, “Maria, Maria”, “Black Magic Woman” and "Oye Como Va", which was the highlight of the night for us and it was fascinating to see the audience change from attentive to "grooving" (We are middle-aged don't forget, hence that terminology).

Carlos brought on his fiancée - who is a respected drummer - in order that she should pound out a lengthy solo. That is when the first seeds of doubt began to be sown in my mind. The words "Vanity" and "Self-indulgence" appeared at the front of my brain.

On and on they thundered with extended jams and tracks neither of us recognised. Then disaster struck: Carlos stepped up to the microphone to talk to us!!!!!!!!

I remember him being interviewed on The South Bank Show a few years back by a plainly baffled Melvin Bragg. Simon Mayo had him as a guest last week and said it was like talking in a different language.

Carlos Santana is a superb artist and musician but he talks in 1960's Hippy Californian.

This doesn't play very well with a bloke from Walsall and an electrician’s daughter from Barnet.

Midway through his lengthy treatise on "energy" and "light" and the "Universe" I was reminded of the Frank Zappa track: "Shut Up and Play Yer Guitar".

He did but by that time I am afraid the spell had been well and truly broken, and we as one decided it would be a good idea to "beat the rush" and get the Tube home during the encore.

Entertaining but he could have been so much better.

Then the news broke about Sir Norman Wisdom. 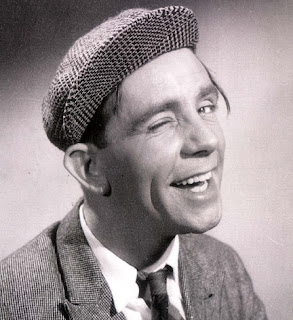 I was immediately transported back to my childhood when my Mum took me to the pictures to see The Early Bird. I have blogged before about the opening sequence when Norman comes down the stairs, stumbles and takes all the wallpaper off with his arm. I am not sure I have ever laughed quite so hard since.

My Mother probably thought I was choking on the odd plastic thingy which was usually supposed to be a whistle in my threepenny "Jamboree Bag".

Norman was King after that for a very long time before I jilted him for the Marx Brothers and The Goon Show.

Sorry Norman, but as a kid the rather sentimental "love interest" thing went over my head. I wanted more falling down which you did so superbly.

We have his films and should be grateful for them. I look forward to a season of them on the TV shortly.

Then one of my old stamping grounds and another part of my childhood went up in flames. I am referring to Hastings Pier. 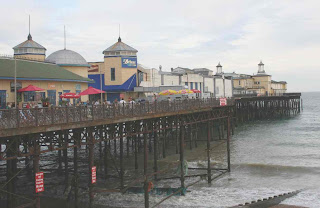 All my life I have been connected with the town. First through my Grandparents who lived there and - for the last twenty years - so have I.

As a child we would run around the pier and play the slot machines. Among these were sliding penny machines; a tray loaded with coins would move back and forth and, by judicial addition of more coins in theory, some would drop off the edge of the tray and down the chute into my youthful sticky hand. There were table football games, which were works of art with the players leg actually moving to kick the ball and their strip was hand made of what looked like wool. There was rock and candy floss and a speedboat that took passengers for a quick trip up and down the coast. We went on it once and it was terribly exciting and we had a tarpaulin that you hitched over your legs to stop yourself getting too soaked.

In 1966 on the apron at the front of the pier, a Space Age metal building called the "Triadome" was erected containing the recently completed Hastings Embroidery as part of the celebrations for the 900th anniversary of the Battle.

My sister, being three years older, loved the pier as there were bands on and boys! (hopefully of the type Mother had warned her about). The Rolling Stones, Jimi Hendrix, The Who and many others appeared there. My friend Clive (who is rather more of a historian than myself) told me that the last appearance with Pink Floyd of Syd Barrett took place in the concert hall at the end of the pier.

It gradually became neglected and tatty and rather sad. I remember one dreary cold winter’s evening in the early 80's walking onto the pier and past one of the Bingo stalls. Half a dozen pensioners sat flicking the plastic shutters across the numbers as they were called as they had a console in front of them rather than a sheet of paper. The first prize was a 2lb bag of sugar or a catering tin of baked beans!

However by then they did have a "What the Butler Saw" machine as a retro exhibit. The answer for you excited teens is: Not a lot really. A woman dancing with a broom in her underwear to be exact. 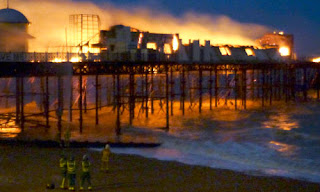 In its last incarnation before its closure four years ago, as it was deemed unsafe, it was decided to make it a sort of upmarket bazaar with no slots. So in came the shops selling Dream catchers and bits of driftwood and shells, which duplicated the dozens of other shops around town selling Dreamcatchers, bits of driftwood and shells. When this didn't work furious voices demanded that what was needed were slots and the cycle began again.

We have a family picture of my Mum as a rather goofy teen standing on the pier in about 1935. Now part of my family’s history, and part of thousands of other people memories, lies in smoking ruins; ironically, just as it looked like some progress was about to be made towards its restoration.

Before the war Hastings boasted two piers. Now there is the remains of one. It would be criminal to let this one disappear too. 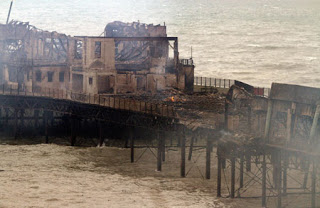 Don't forget, you can follow me on Twitter by clicking here and- using the same login - you can follow me on Audioboo here.
Also, if you want to request a record for Listener's Library, click here. Try and surprise me with something we have never played before, I dare you!
Posted by Alex Lester at 16:14

It was a shame to hear about the death of Norman Wisdom. Here's my blog entry on Norman

I sympathise and know what you mean about Santana. Such high expectations, such natural, gifted talent, such turgid self-indulgence. A friend of mine lent me his copy of the triple album Lotus in the 1970s and eulogised long and passionately about it - there were so much discordant jamming and drum solos on it it bored me to tears.

Every cloud, though - at least they've proved you can make a silk purse out of a sow's ear with the Dome!

Alas, all that pathos made me want to cringe and go away and hide whenever there was a Norman Wisdom film on. Better in the roles he took in later life, and you had to admire the way he was determined to keep working almost to the end.

Hastings Pier is a tragedy. Funny how a lot of piers seem to end up that way.

Mr Wisdom was one of my Dad's favourites. Try as he might, he couldn't get the same (or any)interest in him from me. He came over as a very nice man, in interviews, but slapstick was not and never has been, funny to me.

I do appreciate, however, that it was to lots of people. Go On You Way, Mr Wisom, with a Smile on your face, and that glint in your eye.

So glad to read Micky's comment - my friends all loved Norman Wisdom but I couldn't stand his silly nonsence. I couldn't get my head around a grown man throwing himself about on the floor and acting the idiot - even when he was a fair age - just a bit weird I thought. So its a relief to know I am not alone.
We visited Hastings Pier when we were there on holiday many years ago, what a tragedy that it has come to this. Hope something can be done to save it.