The dismal weather has put a bit of a dampener on things. Are we downhearted?
Who shouted "yes"?

At the weekend the Dark Lady fled to Majorca with her two children and had a bonus result upon arriving. She had been overbooked.

Now, this is not something that often ends in joy…but this did.

I can still remember as an eleven year-old when we first visited the Balearic's. This was the result of it snowing the previous summer on our annual holiday to Wales. My Mum put her foot down and so made Dad worked extra hard to save for the trip. Never before had my sister and I seen sea and sunshine together in the same place. Usually it was huddling for warmth in the drizzle under a damp towel, whilst my parents made optimistic noises such as: "I think its brightening up over there" and "The Sun'll be out in a minute" which, of course, was total lies designed to make us miserable kids feel better and stop grizzling. 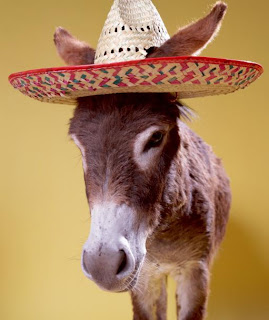 We flew out of Elmdon airport (now grandly titled, Birmingham International) at about two in the morning wearing our best clothes

For some reason, that was the norm back then. Was it to ensure you didn't let the family down by appearing neat and tidy? Was it designed for maximum embarrassment, so that you stood out in a crowd rather like Mormon Missionaries? Or was it to ensure you were as uncomfortable as possible throughout the long and tedious journey.

Obviously this was going to be exciting. We were going on a jet plane!!!!

We arrived at the hotel at about 5 in the morning: hot, tired and dressed totally inappropriately for a transit from the pouring rain of the Midlands to the heat of Majorca. When we arrived we had been double booked with another family of Lesters from Walsall!

The first night was spent in a shared room. Also, as my Dad had booked as "Dr Lester" the word soon got round and throughout the fortnight a stream of battered, bruised, broken and boozy Brits would totter up to him as he tried to read a book by the pool or during meals:-

"You're a doctor aren't yer? Don't trust any of these foreigners. Can you just have a look at this boil on my bum?"

"Ooh Doctor after that beach barbecue last night I've come over right queer. It must be the water. Wasn't nothing to do with the six bottles of plonk and the eleven gins I had. Ooh, its nasty....both ends. I was up all night".

After that, if we went abroad Dad wisely went as "Mr".

I digress as usual. That was Majorca 1967. Fast forward to same island, forty three years on.

DL and the two children arrived tired and grumpy, after a long night journey from Luton and a stuffy coach journey, to discover they too had been overbooked.

Result! No cooking to be done by the DL and everything was included: food, ice cream, drinks. Fantastic! 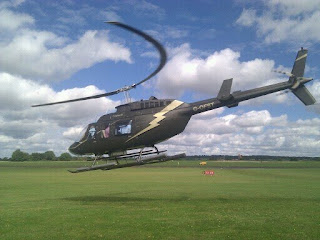 As you can tell by the above, I have been left to my own devices this week. So, on Sunday I went to see some friends up in the Midlands. These friends happen to run a Microlight flying school at Halfpenny Green airfield, near Wolverhampton. There was an "event" on. This seemed to involve a number of things and it seemed pretty well-attended. The main draw, I think, was the helicopter rides. I chose to watch deeming it better to be on the ground looking up, than in the air looking down. Not sure if it is the result of the camera but I never realised Helicopter rotors flexed so much! They certainly seemed to beat the air into submission and it would take off, blowing a mighty wind into the onlookers faces, fly off and - five minutes later – come back, disgorge its 6 passengers, another 6 would board, and with another mighty wind it would be gone.

Meanwhile, a small biplane was taking part in a flour-bombing competition. The plan, it seems, was to buzz over the runway and fling out a bag of flour in the general direction of a small yellow van guarded by two marshalls, who must have worried that the bag would hit them. If it had, it would have raised a welt. I'll be bound. Not sure what practical use this exercise had apart from piloting skills. Maybe it evolved from the last war when Britain was in a dark place and under the threat of invasion:

The Home Guard with its one ancient biplane would be tasked to see off the invaders with anything to hand.

"Remember men. If the Hun isn't on the run after we have thrown flour all over them, use the castor sugar. If that fails, hurl Private Godfrey's sister Dolly's Upside-Down cake at 'em. That should see them back over the channel double quick. They won't be able to endure bakery bombing." 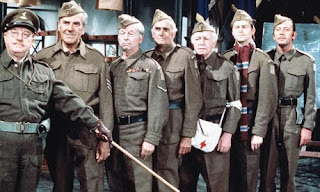 If you have been tuned to the show this week, you will know that I have been expecting the arrival of mobile phone handset no.6. The previous one that was guaranteed to work decided it would not send nor receive picture messaging. It was with some trepidation that I trudged through the pouring rain and entered the shop in order for the staff to set it up. The assistant seeing my current phone was waxing lyrical about how good it was, until I informed him that this was the third of its type that had failed to perform and I was here to collect a different handset.

iPhone4, to be precise. For some reason it has a smaller SIM card. After tussling with it without success, trying to transfer all my numbers from the old phone to the new, he produced a pair of scissors from a desk drawer and proceeded to cut the old SIM card to size.

There's technology for you. Billions spent on mobile phone development and the bloke in the shop takes a pair of shears to it!

Jumbo jet plummeting to earth with a full complement of passengers and crew doomed to a fiery end? Don't worry ....oh actually do worry you can't take scissors on board...bye!

Not sure that the scissors actually helped but after an hour I left the store with a phone that has enabled me to tweet, message both text and picture and also email. Not had occasion to make a call yet......hmm!

After the phone "success" it was back out into the drizzle and on to my favourite record shop which had a sale on, in order to pick up a few albums for "Lester's Library". Already played a couple of them on the show and, as I type these words, I am listening to "The Life You Save May Be Your Own" by The Pilgrim Travellers. Uplifting stuff that may be inflicted on you fairly shortly.

Nice selection of Blues, Reggae and Rock, as well as a couple of Randy Newman albums that I was missing from the spare bedroom, make up the 15 that I squelched back to the rental flat with yesterday.


As I made my way in the deluge, I became increasingly irritated by the poor driving skills of pedestrian with umbrellas.

In the benign dictatorship that is my master plan for Britain when I assume control (sorry did I not tell you of my Napoleon complex?) there will be “Lessons For Some Things That You Didn't Realise Needed To Be Taught”.

Number one. Umbrella skills. They should teach these in schools. So from a young age children would know how to furl and unfurl a brolly without flinging water over others. How to negotiate busy pavements without blocking the path completely with an over sized golf job. How to control them in gust of wind so they don't turn inside out causing them to be waved wildly in any direction. More importantly, they would learn to keep them at a safe height so that others don't have to walk with a stoop to avoid losing an eye.

Also, thanks to the idiot who managed to entwine my hair as she walked twirling her brolly, perhaps thinking she was Twiggy from a 1965 Carnaby Street Swinging London fashion shoot. The rain police would inflict a draconian fine, confiscate the deadly item and she would be issued with a sou'wester. If you can't operate an umbrella in a safe and responsible manner you will be barred from ownership.

Incidentally to the people who sniggered as I wandered past: Yes, I was wearing my sandals as it is not September yet. Yes, my feet were wet but they soon dried out. As did the rest of my clothing. 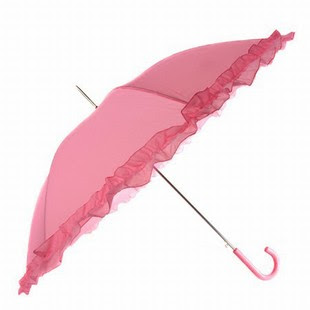 Do I detect an air of grumpiness in your blog this week dark one, are you missing the DL or is it just old age creeping up on you with all the comments on the shoe this week about getting older - or is it just having wet feet that got to you. Anyway it made me laugh particularly your nice pink brolly; do you have a pink tutu to match or is that just the 4.15 "people" that are kinky in that way.

mmm... thought grumpy man too, left to your own devices - that's how it used to be. DL will be back soon! Have noted observations about umbrellas and will take extra care in future so as not to cause offence!

The light from the object is sort of wiped across the CCD, and the rotor moves while this is happening. It causes interesting effects in rapidly moving stuff.

what a fabulous comment in the message above this one - wish I knew what it meant!!

"The rotor's not really bent; the camera done it."