BACK IN THE HIGHLIFE AGAIN

Down to earth with a bump after American Adventure 3. I don’t think I have known four weeks go so fast.
Most of the first week back was spent doing all of those exciting things that you have to do after a holiday, such as laundry and sorting out unpaid bills. Also catching up with friends who ask, “Good holiday?” or “how was the trip?”, hoping against hope that you will not bring out the photographs.
On this occasion, as it was my first jaunt with the Dark Lady, people also asked: “Had your first argument yet?” I can report quite truthfully as of this date: not so far and long may that continue. We both had a terrific time. Relaxing and enjoying each other’s company.
One of the many bonuses of this job is the music. Four weeks away and there was a mass of CDs to return to. Record companies hoping for a play as part of “Lester’s Library”, or maybe hoping that a track could be taken along to the playlist meeting for possible inclusion by producer, Dr Strangelove.
Rather like sorting six issues of my local paper into date order before I start to read them, it was a question of getting the music into release date order; there is little point in playing something that won’t make the shops for two months, by which time we will have forgotten about it. 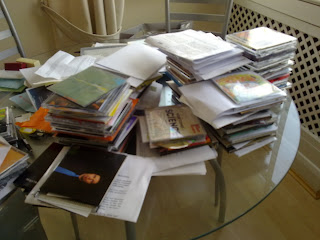 The next thing is to look through and decide which ones to listen to. A lot of the stuff we get is just not suitable for the shoe. Not a big fan of talent show winners, nor teen heart-throbs. Then there are the charity records. Taking aside the whole issue of the doubtless worthwhile cause, I always feel like I am being “mugged” for charity and there is a lot of emotional blackmail involved.
There are so many out there these days, I feel if you play one you have to play them all. And that would not leave a lot of room for anything else, would it?
How can you decide to play the “Cat Relief” CD over the “Pooch Idol” offering? Children in Need is the official BBC charity so they get a “bye” as far as this argument is concerned. To the person raising money for their charity though, their charity is the most important one in the world.
Then, at certain times of the year, other music makes its appearance felt - not always comfortably - but its presence is there. Christmas means a rash of terrible novelty songs as well as some good stuff which will get on. I still shudder at the memory of “What do you get a Wookie for Christmas when he already has a comb?”.
You may have noticed that we are in the grip of World Cup fever. So out come a whole slew of soccer-related novelties. We have our own views on organised sport and football in particular so we are covering the “beautiful game” in our own way which does not include home-made tributes recorded in bedrooms, or groups of “lads” belting out undying love and winning certainty with maybe a micro-celebrity or two to make the CD sleeve look slightly more convincing. 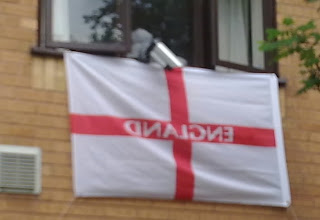 It has been a whole two months but you can’t keep a good Geek down. So it was to Liverpool on Friday for another of our famed “Nerd Nights”. Not been to the ‘pool since about 1994 and it’s a changed place. It was rather run down and grubby on my last visit. Since then it has been transformed. Must be something to do with its City of Culture status. Which brings us neatly too…..
Booked into a budget hotel opposite Albert Dock and we found ourselves in the midst of ”Leah’s Hen Weekend” She is obviously a game girl as I counted about 20 of her closest “WAG-tastic” mates had turned up to give her moral support. This seemed to mean dressing her up in L plates a bridal veil and a fat suit and parading her round the city. If this is what friends do I hate to think what her enemies had planned for her. Wonder where the Stag night was? Manchester? If I was a blushing bride and my intended told me that he and a few mates were going to take a weekend trip to say, Amsterdam or Prague, you know he has two things on his mind. 1)Beer and gallons of it. 2) Prostitutes.
Sew him into his fat suit girls before he gets on the plane and you will have no problems. 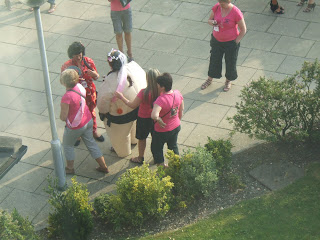 The usual suspects turned up for the ritual humiliation that is DJ’s talking about jingles, who just got fired from where, and trying to outdo each other on chart placings and record labels.
Thankfully on this occasion there were no outbreaks of impressions. When you get “voice conscious” broadcasters all in the same place, the noise and the men of a thousand character voices can be deafening and probably very upsetting to the lads circling the spray-tanned Hen Night girls like sharks circling a walrus. (I am trying to continue fat suit motif here, you understand).
Headed off to a very nice restaurant which has been created from one of the warehouses and we had a nice long table all to ourselves. We ordered, and this restaurant had a good way of making sure you were ready to eat. The food took 90 minutes to arrive. The reason apparently was that some of the party had opted to stuff themselves with starters so the kitchen was waiting until everyone was in sync before bringing out the macaroni cheese, in my case. Radio and TV presenter Charles Nove opted for a “Meat Pizza”. Why is it that whatever you order in a restaurant, the other person or person’s food looks better? The meat Pizza did exactly as it said on the tin. It could have equally accurately been described as “Abattoir”. Think I noticed a couple of hooves amid the pile of meat on the thin crust pastry. It wasn’t quite the 72oz steak that I saw advertised at the “Iron Skillet” on my last American Adventure, but it would have served as a tasty starter for that meal.
When the burping and lip-smacking ceased, a crowd of us (with food down our front) headed into town. We hit a variety of pubs in and around Stanley Street, one of the last bits of the city - along with the “Liver Birds” - that I recognised. The rest having been rebuilt, tarted up and pedestrianised.
Trouble with Nerds is that we want to talk. It is increasingly difficult n a city centre on a Friday or Saturday night as pubs are aimed at people who want to stand around and shout at each other above deafening music. I love music but am not sure that turning your favourite tune up to a level where blood issues from your ears makes it any more enjoyable. In fact I would wager quite the opposite.
10,000 Watts of the “Singing Nun” for instance is probably going to drive anyone mad.

We found ourselves in a bar with lots of musical instruments in glass cases; tt may have been one of the “Hard Rock” franchise. As the walls vibrated with the sound I remember thinking to myself; “what a waste of perfectly good guitars. They should be being played not stared at in some boozer.”
We eventually took a cab to the basement bar of the Everyman Theatre, which was altogether more civilised. It had everything a committed Nerd needs: beer and a big table to sit around and talk radio-related stuff. 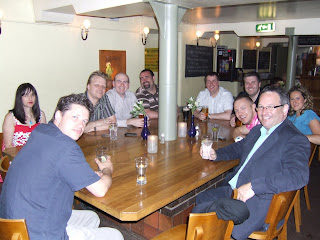 It also sported a selection of people in cowboy hats who had blown in from the theatre upstairs.
Soon it was 1.00am and we headed back to the hotel for a couple more. We had been assured when booking that the bar was open for as long as was necessary. It was. Providing “you want soft drinks only” said a gleeful staff member.
It was at this point that I remember the expression “Don’t shoot the messenger” and thought that perhaps in this case we could make an exception.
We went round the corner to a different hotel where the rump of the group - about five of us - sat around and chatted until bedtime at about half-past three.
The aftermath of these events is always the same.
They are long, shouty and very enjoyable evenings. This means that rather than having a sore head, not much booze is consumed over a very long period of time. So everyone turns up red-eyed for breakfast with a sore throat. Everyone expresses undying love for each other and plans are made for the next one in two months.
This explains why I have sounded slightly “crackly” on the show this week. However, all is nearly back to normal. 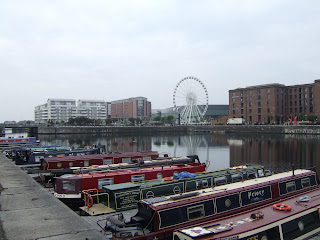 Incidentally. Look out Swindon: The Nerds are coming
Posted by Alex Lester at 17:51

isnt it funny there you are going through life and suddenly without warning people are playing music too loud! whats that all about eh?i can cetainly agree and it co incides with teenagers being really annoying and noticing how every young person on tv shouts all the time...i can see where you are coming from,christ it must be we are all grumpy old men all of a sudden!

Always fun to read the blog and listen to the shoe. My question is what percentage of texts/tweets/emails etc get a mention on air?