This is one of my favourite times of the year.
If you live in a seaside town, as I do, it is doubly exciting as the place comes alive at Easter.
Spring, tourism and - above all - commerce are in the air.
After the winter spent looking at empty flower beds on the seafront, the council workforce have planted all the flowers so the promenade is a riot of colour.
Down in Hastings old Town the rides and the shops (selling all those things that burn a hole in every child’s pocket) re-open after being boarded up for the winter.

Who could resist a Native American dream catcher? A bit of coloured drift wood? Some ornamental pebbles worn smooth by the sea? Sticks of rock, fudge made somewhere else but with a picture of Hastings stuck on the box lid and inflatables of every size shape colour and hue? Some years ago, I read that someone had to be rescued from the briny as they had fallen asleep and floated out aboard a giant pair of inflatable lips. They were rescued by a man on a banana! 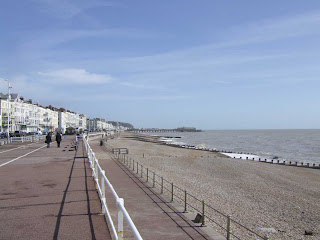 Much excitement this year as the East Hill lift was due to re-open after being shut for at least a year for repairs. This is a funicular that gives breathtaking views of the beach and the town as far as St Leonard’s. It had crashed and so it was decided that it would be completely refurbished and the “coaches” replaced with ones of the original design. This took me straight back to my childhood when we used to visit my Grandparents who lived there and we often were taken as a treat. Not been on it for years so it was a delight and, what is more, the council had removed the annoying commentary that would blare out of a tinny speaker the moment it started moving, so the majesty of the view was disrupted.

I always enjoy showing visitors my town and so it was great fun to bring “K” with a view to bringing her children at a future date. Now, the hard thing is to try and put yourself in the mindset of an 11 year-old boy and a 14 year-old girl. 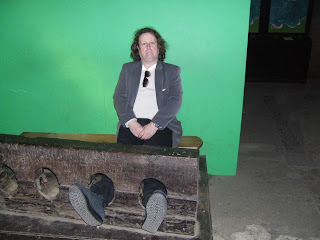 Well, to start with we headed for the West Hill lift which, although it is not as impressive as its East Hill counterpart, is nevertheless fun as it travels through a long tunnel and you get a longer ride for your money.
On reaching the top, there is a broad expanse of grass which is ideal for kite flying. My Granddad had an ex-Met office weather box kite which we would fly to great effect, he having to hold onto me to stop myself flying away over the cliff tops.

A short walk to the castle where, as a small boy, I made the guided tourists howl with mirth when my lolly fell from its stick. Quick as a flash I picked it up and guzzled it. I was a firm believer in the five second rule even then. Less than five seconds and no germs will attach.
Then…a result. There are some sandstone caves with ornate carvings and an air of mystery and menace. Not visited for 15 years or more and as a kid these were known as “St Clements Caves” and, again, had a guide and the only souvenir was a tin badge. Now it has become “The Smugglers Experience” There is a lot interactive stuff as well as historical context and exhibits from the 17th century. Smuggling was rife in these here parts and only ended when import duty was reduced and so made the margins so low it wasn’t worth bothering any longer.
As you may be aware for the last few weeks I have been trying to re-jig my image, so I have created an alter ego: “Johnny Havoc”. You are having none of it, frankly, but still I persevere.
It was whilst I was in the caves I remembered that my Uncle Barrie (my Mother’s brother, who is the keeper of the family archive on that side of the family) had managed to trace the family back to the 17th Century and I am delighted to inform you that one of our ancestors was a smuggler and was executed for murdering a customs officer.
It’s in the genes so don’t mess with J Havoc Esq. me hearties! 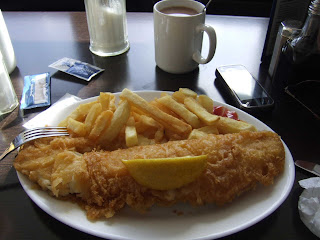 Lunchtime and if you are by the seaside you have to have fish and chips.
The Sun was out but there was no room outside so we had to eat indoors at one of the many cafes. Just as well really as these places are a magnet for seagulls. They are big and quite aggressive particularly during the breeding season. As we watched, one swooped down just as a couple left and grabbed what remained of their cod and flew off with it.

When I lived in this part of town I remember one night climbing out on to my “roof terrace” (my kitchen roof) and nearly lost an eye to a furious breeding pair who had nested there. 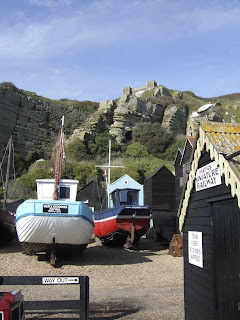 Then we had a trip on the train. This is a narrow gauge railway that runs for a few hundred yards past the amusement park with its go carts and boating pool.
As a child, this was a world of delight with the locomotives being real steam and the pool having paraffin-driven wooden boats with big rope fenders. Now it is diesel and pedals. Economics has reduced its appeal for myself, I am afraid. I can still remember my Dad taking my sister and me to the fair and producing two last sixpences from his pocket for one last go on the Helter-skelter. Do such rides exist any longer? The years have not been kind to the amusements in my book.
Gone are the dodgems with the tattooed youth with the quiff who chatted up the girls as he hung on to the conductor pole. Candy floss now looks horribly unhealthy and the games in the arcades seem to only have one prize this year; the Meerkats from those insurance ads.
However, will it appeal to two children with their whole lives before them?
Obviously, the11 year-old lad is going to enjoy go-karts, novelty rock, the train and the east and West Hill lifts.
It is going to be tougher to keep a 14 year-old girl amused if there are no bad boys to make them giggle.
Now if they only made novelty rock in the shape of the bass player from the Kings of Leon…….
Posted by Alex Lester at 17:02

You definitely grew up at better seaside than me. Margate was just 3 mile along the road :(. Broadstairs was always my favourite and I think more akin to Hastings. We used to get taken to Dreamland Amusement Park which had a zoo within the park but we only went on the last weekend of the season when it was half price - not that we cared. Simple pleasures of childhood are the ones that form the best memories. Have a great weekend!

How do you get time to broadcast ?

Alas your DJ slot has been moved so that for most of my early shifts I now get Sarah Kennedy on the way in to work.

The lady can't string a sentence together - not even when she's reading. How very disappointing. And what a total contrast and relief on the odd start times that I do catch your show.

I'm sorry, but she should be retired. And as for Radio 1 DJs ... totally amateurish.

I can see you are training hard for your American adventure III. A huge plate of fish and chips, great for expanding the waistline.

Mmmm, what a strange looking Sarah Kennedy. Oh, its Alex bad boy in disguise. Wish you were on that slot daily - it would be so nice to listen to the radio again whilst going to work. We can only hope.

Help, not a little Johnny Havoc on its way? Or it may be a little Fanny Cradock? mmmmm. Will the world be safe ... one Alex Lester is bad enough ... but two - arrrgggghhhhh.
Regarding the 5second rule - that only applies IF there is NOT grit on the ground.

''After the winter spent looking at empty flower beds on the seafront, the council workforce have planted all the flowers so the promenade is a riot of colour.'' ...

Where are the pics of the flowers, Mr Lester ? I was expecting at least 1.

I too remember going to Hastings when I was a little boy, and trying to lift up a broad sword to hit my brother with which was bigger than me. Alas to no avail.

I remember that little cliff railway with the big patch of grass at the top, happy time. I'd love to go back there but my friends think Hastings is a dump... so I'll have to get the train down on my own.. if I bump into you I'll have to chat to you, sorry...