The weather seemed to have been the main topic of conversation over the last week.

It is difficult to get much of an idea on how the rest of the country fared when you are cocooned in a nice warm studio in London. Yes, it snowed. Yes, there was ice on the pavements. However, things were manageable.

It was only when I decided to head home to Hastings that I realised just how much of a fall there had been. The Kent corridor attracts bad weather like MP's to a brown envelope.

I was wondering why the trains were not running very reliably until I managed to get one that headed in two stages with a substantial wait in between all the way to the coast. It was a Perry Como Christmas out there! 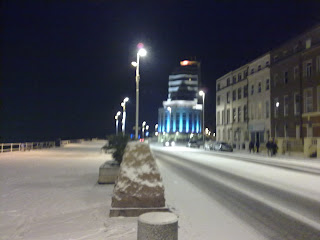 What I did not understand though was why the train companies didn't just say, “Sorry - no trains today” rather than the indicator boards showing, “7.23 Delayed” at 9.30am. This actually meant no trains had been running that day. I was slightly concerned that on the first day of my new time slot I would not be able to make it back.

So Sunday morning I went to the station. The TV and the rail websites had said all was well. The indicator boards read, “Delayed”. Suddenly a train to London arrived and I hopped on. 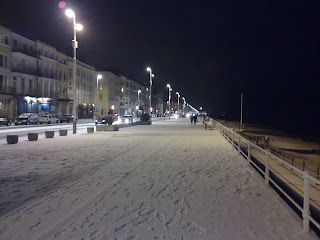 Cancellations meant that plans had to be changed; meeting some friends in the pub on Saturday to watch a band turned into meeting a friend in a nearly deserted boozer for a few drinks before going home to watch the TV.

There was some discussion on the programme this week as to whether I had slipped over, fallen down or "had a fall". The answer was I slipped over in the snow. I am at least 20 years away from "having a fall".

I like to think that "having a fall" kicks in at pension age plus 10.

You wondered why I had not taken the time to do a snow angel as I made an embarrassingly large hole in the snow. I was well wrapped up (he said in his Monsieur Bibendum defence).

Very simply I was never a daredevil kid and this has spilled over into my adult life. I have a very strong self preservation instinct. That is why, having been asked numerous times over the years to do things for charity such as bungee or parachute jump, my answer callously is: “I am not going to die on somebody else’s behalf.”

However, I think that God (other deities are available) may have got wind of this and exacted revenge. More on this in moment.

The reason I didn't try and stay in touch with my inner child and make a snow angel was that I was actually in the middle of the road. Albeit a side street hence the lack of grit, but all I needed was a yummy mummy and her offspring in their 4 x 4 to roar past in a cloud of CO2 and Monster Munch and I would have been channelling Flat Stanley.

Back in the big city and I decided to go for a walk in the park the other day. A fresh snowfall had meant it was looking pristine rather than that slightly moth eaten look that snow gets, rather like an actor making a special guest appearance in a show they left 10 years earlier; “Ooh, haven't they aged!”

I had forgotten that snow attracts youths. I was suddenly hit by a flurry of snowballs as the almighty exacted a terrible revenge.

You are supposed to laugh this stuff off, I think. Smile, shake your head and walk on.

NOW I KNOW WHY WE HAVE GUN CONTROL IN THE UK!

What is the law here? Tell me the etiquette. If there are three of them laughing at you, are you allowed to blast one of them back with snowballs as a lesson to the others? Or can you hire Mafia hit men to teach them a lesson?

Mustering what little dignity I had left I squelched away with their derisive laughter ringing in my reddening ears. 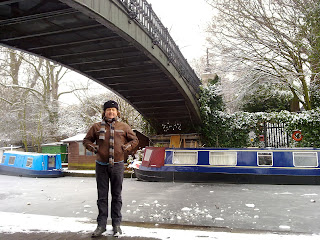 First week of the new time and it has been heartening to hear from so many of you contacting the "shoe". It is always difficult and upsetting when a programme schedule changes.

Some people are pleased, some are unhappy and most probably don't care much either way.

To me, the important thing is to carry on and make the best of it. After all, how important in the grand scheme of things is someone who plays records on the radio?

However I must share with you that I am a little concerned with Ss, my new producer. He revealed that he had had a dream in which his, erm, nipples had been replaced by, erm, ahm…two, um "cough"… "members". He is now known in the office as, Dr Strangelove!

SNOW SNOW AND MORE SNOW ! ITS WINTER IT DOES SNOW AND GET COLD < SOMEONE SHOULD TELL THE BLOKES AT 10 DOWNING ST .WE CAN TAKE IT WERE BRITISH HE HE HE
ANYWAY I WISH ALEX AND SS THE BEST LUCK IN THE WORLD AND ALL YOU FANS OF THE SHOE
don,t forget everone WORLD PEACE IS NEEDED GET A BAG OF CHIPS AND TALK THINGS OVER
LOVE THE SHOE MOGGY XXXX

Had a fall eh? I think you must be older than you admit! I had the same trouble with a bunch snowball terrorists on the local cricket field - mind you, most of 'em couldn't hit a cow's backside with a banjo. I forgave them anyway because they had decided that snowmen were for wimps and had constructed and 8 ft high penis couple with veg! Terrific street art - give them an Arts Council Grant - that's what I say.

See you on the ice.

Its snow joke when you go splat in the road and no one believes you with a sob tale "Going TO the pub" oh yerrrrr ... mmmmm.
A bit more work required in the blubber watch department then you will be slim enough for them to miss!

Hey Dork Lard,
Shifting the shoe to an earlier slot ... does this mean we can be rude? After all, the little darlings (ie. brats) will be in bed then!
Cooool
Love the Shoe - in spite of a 12 hour delay!

I am not happy, I used to catch at least some of your shoe, at 5am or so and now if I wake at that time it means leaping from my bed to turn the infernal woman over. (no prizes) and fail to understand who and why someone could make the decision to cut Janice's show and move you to even more of a graveyard.
Sorry to hear of your fall, I guess that you are least already living in the pensioners playground so won't have to move too far

You're taking the shoe's time change thing like a man (a Brit man) - you should hear the whining and back-biting going on here in the US because someone decided to swap Late Night TV show presenters around and change time slots. Ye gods!!

I agree with Colin! Miss you to wake up to!
You didn't fall Alex, you slipped! I did exactly the same.
You are looking good in the photo.

Looks like you are doing a "Hoff" by the canal and praying for someone to take the picture so you can breath out!!

Love The Vest Time of the Day Shoe - blame Tony Livesey on 5-Live...

I fell over too, in the car park at work. I like to think it was with some style as it was in clear view of three floors worth of offices!

I subscribe to your view about the age at which falling (or slipping) over can be termed a fall and have calculated I have another 23 years to go.

The photos are lovely; are you sure you can't get into those leather trousers yet? if not you must be getting pretty close surely?

Love the shoe and getting used to hearing most of it on the i-player, though it's not the same as hearing you live.

penis nipples huh? who said the best time of the day shoe is low brow? who said the beeb was dumbing down? you dont get penis nips and pensioner slips on any other shoe.....no one else, no where else...... p.s a "fall" on the way to the pub is much more embarresing than a fall on the way home from the pub....at least then you would have an excuse....love the shoe dork lard.....
baker boy

Are you sure you fell or did you have a fall?
I went splat 4 times on the ice. Only once was I caught in the act - phew!
PS. Great alarm clock ... at 5am. Leap out of bed to turn off the radio and boot up the PC to listen again (previous day!) whilst getting ready for work.