Wow! All the grumbling seems to have paid off. Every couple of months the DJs hit town for a night of drinking, eating and Nerding. (Nerding: being horribly obsessive about stuff that, by rights, should bore you to tears).

This time we headed to Brighton. As I have outlined before when we do these events, we get a rush of enthusiasm with a lot of people initially saying they will attend. On the night, after a day when the mobile is red hot with people cancelling, it is usually down to the "Magnificent 7".

This time, there was a mega turn-out. And what is more, there were women there!!!! 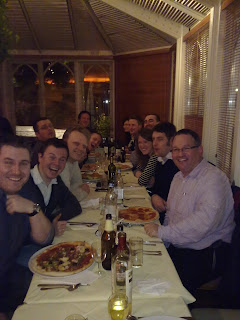 I have met women before and they are nice! I have also spoken to women about their men and hobbies.

Never quite sure about hobbies and men. Do they do it because they like it or do they do it to get away from their women?

Which would be the perfect hobby? I once interviewed a number of women whose husbands and partners were radio amateurs (Not Hams. They don't like this. It makes them sound like Nerds).

They liked this as a hobby as it meant they always knew where the men were. In their "shack", which could be a shed, attic or spare bedroom.

This worked on all levels. As a hobby it was clean, relatively quiet and close-by. This meant that, although they were in proximity, they were not under the woman’s feet. They were close enough if the woman suddenly felt the urge to have some new shelves fitted or were desirous of a kiss.

From the blokes point of view it meant that their "shack" was a little oasis of calm away from "the wife", however, close enough if he suddenly decided he wanted to put some shelves up and needed advice on where in the house to do so. Or he felt the sudden urge for a sandwich. 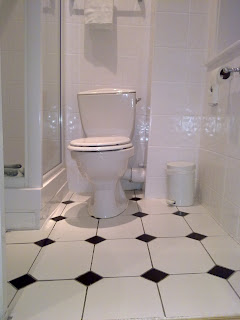 The hotel in Brighton was on the sea front which is a good location. Although my room was small it was clean and tidy and boasted yet another sloping floor. This time in the bathroom. I have lost count of the number of sloping rooms I have stayed in over the years. When I went to "Guilfest" a couple of years back, I stayed in a room that sloped so dramatically it had a warning sign on the wall, in case you suddenly lost your footing and found yourself hanging by your fingertips from the windowsill like Harold Lloyd.

Predictably it was raining hard as we trudged from the hotel to the restaurant and then to the pub and then back to the hotel.

No idea where the time went but I found myself and the excellent James Walsh from "Kerrang" still chewing the fat at 4.30 in the morning. 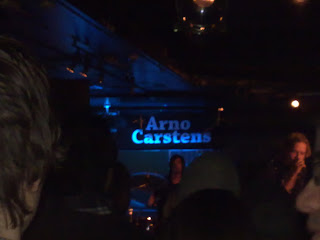 Now we are into the new year, the gigs and showcases are starting up once more and so it was off to the basement of a boozer just near the BBC to see Arno Carstens from South Africa embarking on a solo career after being in the band, Springbok Nude Girls.

Janice Long invited me to the Roundhouse in London to see a special reworking of the Beggars Opera by Charles Hazelwood, with people from Portishead and the Unthank sisters, among others.

The word "opera" usually strikes terror into my Philistine hide, but Janice assured me it would be fine. It was a revelation and Charles introduced each item and explained his vision for the music and the treatment of certain tunes and the history. The man is obviously mega clever. The sort that makes you feel you have a hand inside your head squeezing your brain whilst you listen to him. He gave huge detail in a fascinating and amusing way without notes.

The only downside is that the seats were none-too-comfortable, as a by-product of my back going "ping" as I put a sock on the other week. I now have sciatica which is rather unpleasant and not to be recommended. I have been going to the physiotherapist which, ironically, is up four flights of stairs. Purple faced and limping, I made it into the surgery the receptionist asked "how are you" and being British I replied, "fine". Then I corrected myself. "Well no, frankly, otherwise there would be little point in being here in the first place".

I am being manipulated and have been given some exercises to do which I hope will do the trick. It is rather a strange feeling for a middle-aged man to be apparently tied up in knots by a young woman who he has never met before who assures him that this is for his own good.

Just reading that back...nope its fine.

Ahhh! Nice nod to The Bluetones in the title. I see what you did there.

I haven't been to a gig in ages, hubby too busy with his hobbies..

Can you take me next time?

WELL YET MORE MODS AND ROCKERS HIT brighton sea front ! running about shouting and dribbleing ,
aka djs on tour he he he looks a great time alex thing is alex lesters a lord of the night so thats dark or black HE,S A ROCKER !
thanks for more inside the life of a top dj living a rock n roll life
love the shoe
moggyx

Uneven floors, mmmm. Are you sure it is not the booze!

Hobbies are for escaping the other half. Why else would people spend hours hanging around on a cold railway station when NOT waiting to board a train (trainspotting)?

Or spending hours in the garden shed or garage when the pub is closed?

I am sure that its not the floor but the walls that are uneven, either that or the plumber/builder was vey drink when he fitted it!

Hope you didn't need more than a No1