I have been shamelessly using you. I am sorry but you have made a rod for your own back. This is the second time and expect it to happen again. If you are feeling slightly dirty and used take a small crumb of comfort from this: If you weren't so good at it you would not be exploited in this way. However I give my word that I will respect you in the morning.

After the success of your suggestion of a wheelbarrow for Anna and John's wedding a few weeks back, the prospect of my Dad's 83rd birthday came up for discussion on the show and with it what do you give a man who has for the last few years been decluttering his house. "Ornaments? Pah- more to dust". We were beginning to wonder if eventually he would be sitting on an orange box in the lounge eating off a wooden platter with a spoon made from horn.

To begin with you suggested the typical things that you would associate with a person of mature years. A stairlift. A new hip. Teeth. Slippers. However bearing in mind this man walks at least ten miles at the weekends with usually a country walk of a similar duration during the week, luckily you were a bit premature with those gifts.

I remember when I was 40 I received a lot of those "from now on never pass a toilet, never waste an erection and never trust a fart" type cards. When I hit 50 the onslaught redoubled. "From now on it’s impotence and early onset Alzheimers" which frankly don't tend to lift the mood. Although in truth none of the milestone birthdays have bothered me unduly as like my Father I don't feel anything remotely like my age.

So it seemed at first glance according to you the obvious gift for his 83rd was a casket.

As we were meeting in a restaurant in Birmingham City centre on a busy lunchtime and it was upstairs, it seemed it would be a bit of a stretch to get the box off the train and across the street into the building. It would also probably upset some of the other elderly diners.

We chose the place as it specialised in good old fashioned solidly British food. So it was steak and kidney or chicken and mushroom pie with 3 veg and treacle tart and custard for afters. Then frothy coffee. Just that coffee. Not a mocha not a latte not a cappuccino. Frothy coffee served by a waitress, not a "Barrista".

Then after further gift suggestions in a similar vein we hit paydirt when I mentioned that as the clocks had gone back he struggles with resetting the clock in his car because often the press of a wrong button and the readout reverts to Turkish, making it a little hard to get it back to GMT.

You suggested a Turkish/English dictionary. This seemed a genius idea until it was trumped due to its extreme silliness by a mask and snorkel. 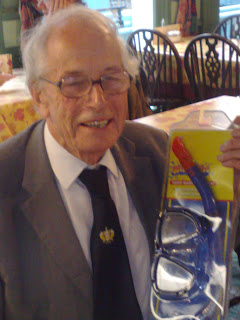 Whilst he reckoned he has not been swimming since about 1985, my Father thanks you.


A correction has to be made here as I have in the past referred to one of my friends Jacqui who is half Fillipino as "Pino" in previous blogs when we have been out. Eugene who regularly listens to the show and divides his time between the South seas and New Zealand pointed out with the world weary air of someone who knows that she should be "Pina" as that a Fillipino is a bloke and a Fillipina is a girl.

Anyways Pina and I linked up to go to see hair metal gods Bon Jovi in a special Radio 2 gig at the Radio Theatre in Broadcasting house in London. Earlier in the day I had been out with Liz Kershaw for lunch and a combination of her having a dental appointment and the train being late meant that we didn't start to try out her newly improved teeth until nearly 2pm. Like a fool I had pasta which spawned a "dangerfood" thread later in the week as for some reason I am unable to eat many types of food without seemingly bathing in it. My shirt had telltale spots of sauce on by the time I had finished. Liz on the other hand - and it may be a women thing - was pristine. I once saw Delia do an entire cookery programme in a white pullover and she never got a mark on her. I think she must be a witch.

The upshot of the late start for lunch meant that by the time Pina arrived for the gig. "Are we going to eat? Eating is a hobby of mine" I had not really digested much of the lunch. So we crossed southern Europe from Italy to Spain for some tapas. Not substantial but frankly enough and rich enough to ensure the roar of the crowd at the gig was matched by the internal roaring. Scientists....cold fusion is possible - check out my lower intestine. 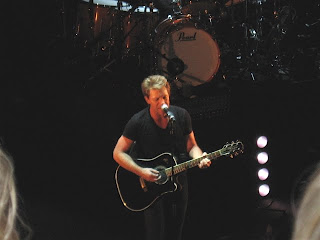 The Radio Theatre is a small intimate venue if you have ever visited or watched any of the concerts via the red button or on the Radio 2 website. So it was fascinating to see a group of stadium rockers life size. The audience featured a large percentage of women and it would appear at 47 Jon Bon Jovi has lost none of his appeal judging by the screams. I did wonder how successful the band would have been if he had been ugly.

They started strongly and did an acoustic version of "You Give Love a Bad Name" and there was as you would expect with a showcase like this a fair number of songs from the new album ‘The Circle’, which I didn't really recognise. However one thing was obvious- they were having a good time so played way over time and rewarded us with three encores.

Out into the night air and we realised that the Christmas lights had been switched on in Regent and Oxford Street and the new Japanese style crossing had been unveiled to help ease pedestrian congestion at Oxford Circus. 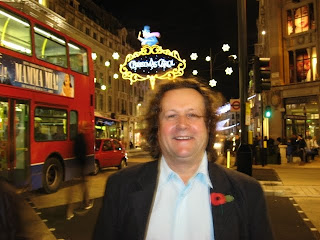 It was a chilly evening but I was sweating. I went home and didn't have any more to eat. Had I tried to bridge the gap between Italy and Spain with something from the French culinary lexicon, I fear I may have spontaneously combusted.
Posted by Alex Lester at 18:38

WEY HEY alex,s dad's birthday bash i love it good britlsh food PIE ! and sticky pudding well done
alex lester dad the boss i salute you sir
and the lovely photo thanks we now know who your lads talking about
love this blog its british life in words
love the shoe
moggyx

Oh yes. Just coffee! More of those places please. My brother-in-law went into a - shall we say - basic, no frills, all-day breakfast kind of establishment in Blackpool not so long ago and said with a bright smile, 'Could I have a latte please?' The gentleman in the ketchup stained pinny looked up from his frying pan, gave him a look of utter disdain, and grunted, 'Well, I s'pose I could do yer a frothy coffee.'

It was a chilly evening but I was sweating - I know that feeling well..but the HRT patches help