Been a bit quiet on the live music front so it was with some delight that a pair of tickets came up for Michael Buble at the Radio Theatre in Broadcasting House, London, last week.

I pride myself on being open minded and, although not a huge fan, I thought it might be a good wheeze to pop along and have a look. It’s ideal for me as the venue is only a ten minute cab ride back and I can walk there from the rented flat. It started at 8pm and was all done an hour later which meant I was in bed by 9.15, giving me about 4 hours sleep before it was time to head to the studio for the ‘Best time of the day Show’.

Susan the finance, (don't hate her she's not a banker), came with me. She has broad tastes and recently has seen Gilbert O'Sullivan, ZZ Top, Fleetwood Mac and Bob Dylan, as well as some classical stuff. I still think Libido Boy and I can claim the most eclectic turnaround, one night seeing blues guitar hero Walter Trout and the next rap/dance artist Roots Manuva. However we did feel a little ancient sitting in the concert hall with our earplugs in, as the rest of the audience hopped up and down on the spot, with the crutch of their very baggy trousers dragging along the floor and their designer underpants on show above the waistband.

We had time for a bite to eat beforehand and found a small Italian restaurant not far from the BBC. Susan being assertive rejected the proffered table and pointed to one which was in a corner where we were less likely to get knocked by passers by. There is something comforting about sitting with your back to a wall. However the only downside of this was that we were next to a huge oil filled electric radiator. I switched it off at the mains but it didn't cool down much whilst we ate. 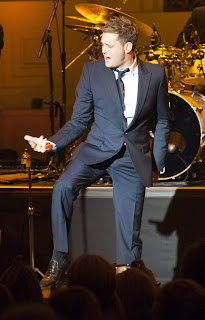 Michael Buble had his big band with him and was a consummate showman who was very entertaining and he engaged with the audience. I like a bit of banter between the floor and the artist. I’ve been to many gigs where the performer often appears to be doing you a favour by playing for you. Or in the case of Lucinda Williams (See earlier blogs), actually stopped and berated us.

He has a terrific voice which lends itself to standards. This is where the problem lies. I have railed against musical snobbery in the past on this blog and on my programme. "Purists" who only reference the acknowledged greats such as Sinatra, Bennett, Torme et al. tend to be rather dismissive of Michael Buble as a third rate copyist.

This was evidenced by the fact I received a roasting from a listener via email when I played his version of ‘Cry Me A River’on the show later that week as it was on the Radio 2 playlist.

Oddly though, the dissident voice pointed me in the direction of the Mari Wilson version. So I politely pointed out in my reply that this view was ‘cobblers’. Michael has won a Grammy and sold 20 million records so someone must like him. Also if I was going to get all sneery about his version of ‘Cry Me A River’ I would not hold up the Mari Wilson version as being the benchmark. That should go to Julie London. I know, I know it is the short man syndrome in me again.

On the way back something unusual happened. This has never ever happened to me before and probably never will again. I hailed a black cab. There are a lot of gags about London cab drivers never going south of the river, taking you the long way round, being spectacularly right wing and droning about immigration and paedophiles. However the 21st century is in evidence, so it is time to rethink that stereotype.

Since I’ve been back in London I have taken a lot of cabs back from gigs as it is the quickest way to get to bed before the show and often the Underground has stopped, so it is pretty much the only way without waiting ages for a Nightbus. On occasion I’ve hailed a cab and it has been driven by members of ethnic minorities, and on a couple of trips I’ve been driven home by women. So taxis are not the sole preserve of the reactionary white geezer.

We pulled up outside the block and the driver realised he’d forgotten to start the meter. "Aye aye" I thought, "what's this scam?" "Call it a fiver", he said, which frankly was cheaper than it would have been normally. I handed him a tenner. He looked at it for a moment and then said...."Nah forget it. Have it on me!" He drove away leaving me open mouthed. Doesn’t he know there’s a recession on? 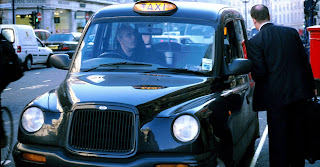 It has taken me a few years to become a fan of Michael's. I too thought he was just a 'wannabe' although I must admit I was never a big fan of Sinatra's anyway. I think Michael has a great voice plus he is charming and very cute. He also looks tres sexy in a suit which scores extra bonus points in my book. Sometimes it takes a while for us to really warm up to someone. Just a little bit of advice. You should think about responding to people's comments on your blog. I think you would get more people to post that way. Cheers.

Being a tad on the awkward side, without the excuse of short person syndrome, I really dislike being told who is a good singer and who isn't, and who I should like and who I shouldn't. I'm a bit like that with films and books too. It's all matter of personal taste. So can freely admit to having enjoyed Michael Buble's singing for some time - without feeling like a musical philistine. Good on ya - and your taxi driver

Sinatra's my first choice of singer for just about any standard, but really, if the song's good enough to stand a variety of treatments, as most standards are, it's great to hear other versions, such as Buble's or Harry Connick Jnr's, or even, Gawd help us, Susan Boyle's. Musical elitism is a pain in the bum.

Taxi driver obviously recognised you - and charged the next fare double. ;-)

HEY a great tale of rock n roll life in the fast line ,i did hear that bathtub were going to do the gig with him but split up two hours before gig
as for taxi man well he will be able to say i had the alex lester in the back of my cab to all now
LOVE THE SHOE
don,t forget find radio shoe on bbc message board tell the world ,,