So it was the time they had been waiting for, with much trepidation, anxiety, organisation and doubtless expenditure. I was going to see the deed done have a good time and hopefully catch the bouquet. 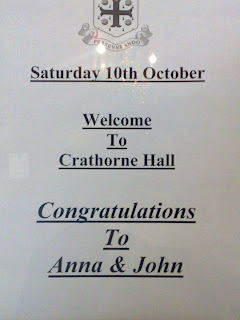 Decided to split the journey so train from London and then from Birmingham to Darlington by car. As I’ve noted in a previous blog, there is the danger of falling asleep on the train and leaving stuff behind. This time I was extra vigilant for my little bag contained my washing kit, sundry underclothes, the wedding shirt and the invite. Plus a pair of sunglasses and an emergency smoothie!

Arrived at Birmingham Snow Hill station, collected my belongings and....er hang on no, I didn't collect my belongings. By the time I realised, the train had chuffed off back down in the general direction of London. A quick consultation with a staff member, a speedy phone call and SAVED-ISH! They would keep my bag at Lost Property in London for me to claim during the week.

Plan B; I had odds and ends lying around in the Midlands so with my belongings in a stylish carrier bag, I lit out for the North East. On the show I’d been asking for ideas as to what to give the happy couple. I wanted to go "off list". It had to be romantic: You suggested a wheelbarrow. Ever the fixer, a phone call had been made to YARM DIY the previous week, and “yes” they did wheelbarrows and could deliver. I had to go to the shop to pay however.

Result! A choice of two fine builders barrows in a shed outside. They even let me use their loo as it had been a 160 mile journey with no stops and a traffic jam near Derby.
Then I checked into the hotel where the reception was being held.

This is where the crazy rock 'n' roll part kicked in:

"There'll be a wheelbarrow arriving shortly, send it up to my room please"

"It’s nothing kinky" I said, by way of unhelpful explanation.

As it happened the shop had forgotten their van was somewhere else so it had to be sorted the following morning.

A nice evening in the bar with some of the other wedding guests and the nonchalant, and quietly terrified, groom. The parents and the blushing bride turned up as well.
A wheelbarrow was mentioned but I don't think they believed I would go through with it. Also looking at their faces they had something up their sleeve.

The morning dawned misty, but it soon cleared, and I wedged myself and the reserve shirt a sort of nasty nylon sub-Simon Cowell V neck into the "Sunday go to meeting" suit. 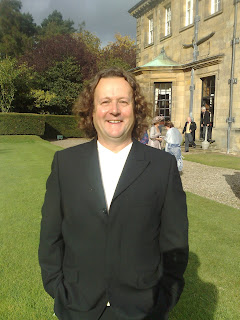 To the tiny church which was jam packed with well-wishers and a jolly female vicar. When it got to that bit where she asks: “Does anyone know of any reason why these two people should not be joined in holy matrimony?" someone in the audience had a prolonged coughing fit. I swear the colour drained from the grooms face.

When the bride’s father was asked who was giving her away, he sprang to his feet like a man being fired from a cannon and barked very enthusiastically: "I WILL"
We exited the church to the bells being rung by one guy who was obviously a one man band during the week, as he managed to negotiate 3 different ropes using his hands and one foot.

Back to the hotel for a slap up feed and the speeches. That is when the happy couple exacted their terrible revenge.... 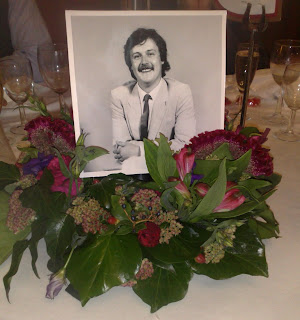 Pride of place under a very intricate table setting was the above, which was taken in 1983 when I worked at a radio station nearby. This is when, as a child, the groom got interested in the radio and met me at the age of 14 in a Middlesbrough department store, having badgered his long suffering parents to take him.

To me the flowers make it look like a picture of some Eastern European dictator whose picture has to be displayed everywhere on pain of torture, and possibly death by, a fiercely loyal and loving populous. Another guest; an impossibly attractive woman in a tiny dress who appeared far too young for me told me that the bride said I looked like Bob Carolgees! Hmm if she remembered Bob Carolgees perhaps she wasn't too young for me after all! I tiptoed to the top table and spat at the bride. (It was a puppet mime hygiene fans). 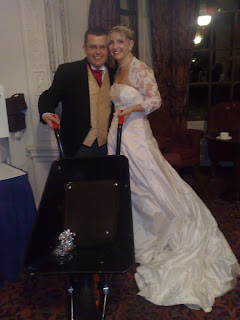 Then it was bar, nerd talk with other DJ's and the odd outburst of ‘Dad Dancing. Also, as with these events, it’s the law that there has to be a child dancing with his or her mother. The child has to have its feet on top of the mothers who is walking them both round the dance floor. It was a terrific day and everyone had an excellent time. It’s also the first time I have been to a wedding that boasted two best men one of whom was a woman. Also by the time the vows had been taken the bride had the same name as the bestman/woman. Confused? I will explain at the end with a handy equation.


I will treasure the memory and particularly the expression on the hotel staffs' faces, as I requested a damp cloth to wipe my wheelbarrow down. Also, one of the guests who passed me on the stairs as I was wheeling my barrow, who just said, "I won't ask".

The gift was a huge success as it also managed to fit all the other gifts in, making it easier to transport them after the reception. So thank you for your suggestion. I think hotels have been missing a trick all these years.

We now take heated trouser presses. TV's, tea and coffee making facilities, minibars, irons and hairdryers for granted. To steal a march on their competitors hotels they should boast:

"Wheelbarrow in every room"
. 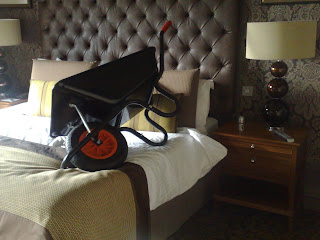 So how did the groom end up with the bride and the best man/woman without being arrested for bigamy?

Sadly though, I never even saw the bouquet.
Posted by Alex Lester at 23:13

Alex, I have stayed at Crathorne Hall - nice hotel and popular as wedding venue.

I really thought you might have changed your mind about the wheelbarrow though.

Lovely blog and photos Alex, I'm so pleased you had such an interesting and happy weekend at the wheelbarrow wedding!

Surely a train from Kings Cross to Darlington direct would have been easier? Mayhaps not, but it seems a large pfaff to drive from Bham to Darlington.
Any news on the Bob Carolgees remembering guest?? Nudge, Nudge! Ha

well a nice account of the big day it seems the sun was out and a great venue ,a mini bar in the room ! i would love that , the photo of alex in the FAB FM days is awsome and the wheelbarrow i see it was the black GTI one nice gift
LOVE THE SHOE from moggy

At last - photographic proof of said wheelbarrow.If you've read my previous rambling to your post of the 1st,remember...its still not too late to swap it for those Binns vouchers... :-)

Re the photo - who is that fine fellow of a man? And,to anybody reading from Yarm or the surrounding environs,no,it's not John Simons.BTW there's even more incriminating photo evidence somewhere on a tribute website,with you getting the keys to a sponsored Nissan...heady days indeed...

That's typical Foster,that is - but there are ways and means of getting your own back. However,does this now mean the return of the old Tees favourite "Trains & Boats & Planes & erm...wheelbarrows?"

As always playing catchup, and last night I listened to the Oddcast from last Friday 9th Oct. Heard something you tried from Libido boy - re spiders not liking conkers which reminded me of something that happened earlier this week.

I had gone to use the Gents at work and noticed that one of the two urinals had a rather substantial spider in it - of a size that would probably make sparrows worried. Despite this he couldn't get up the side to get out (I'm pretty certain that he didn't emerge from the plughole either!). While I was there the automatic urinal cistern flushed and panicked by the sudden deluge of water it clambered onto one of the bright yellow urinal blocks to escape. Perhaps it mistook it for a dingy or life preserver?

So, with the conker plan so badly defeated (and the spiders almost taunting you by standing on top of them), don't go filling your bath with bright yellow urinal blocks as clearly they're not afraid of those either. (Just in case you were thinking of trying it that is).

Love the Shoe and the Oddcast (I subscribe) - listening to the shoe this week until tomorrow (Friday 16th)!

PS - In case you were wondering I used the other urinal - if only out of fear!

I bet the hotel staff at Crathorne Hall will be telling the tale of the wedding wheelbarrow decades from now - it'll be handed down from porter to waiter, to chef to chambermaid. You'll be a local legend (as if you aren't already). :-)

did you buy that moustache? it looks very much like a world war one moustache.if you still have it it could be worth money to the imperial war museum.or you could refit it and try to bring them back in fashion i mean that dick strawbridge has made his into a starring partner!

Could have been worse, you could have left the wheelbarrow on the train instead of your smalls. Train folk would have loved that one. Still, the wheelbarrow looks like it had a good time anyway - whose bed did it end up in, I wonder?

PS Looking good - all that walking is paying off. Have a pat on the head

I don't normally go on to reading blogs and stuff, but you are a legend and all of your listeners, I don't look forward to getting up at 5 some mornings but the 'shoe' makes me smile even at that time.

Looks like a great wedding and I'm sure the wheelbarrow will be loved for years to come!