It is that time of the year once again. Coming round with ever-increasing frequency along with the Queen’s birthdays.

(I reckon with two a year she must be clocking in at about 160 something by now. Why have we not seen her getting yet another telegram from herself and blowing out some candles on the TV news? She must easily be the world’s oldest person by now.)

Maybe I am missing something here. Still, won't be the first time that has happened.

Yes time for the annual Children in Need song fest, with a new album "Bandaged" being recorded. Shortly after writing this I am off into the studio to attempt my offering this year. Hot on the heels of the success that was "My Bruvver", I shall be slaughtering "The Runaway Train" - as if the children hadn't suffered enough!

However, Hellen Bach and Norman who are just two of Terry Wogan’s TOG army invited me to take part in the recording of this year’s anthem at Abbey Road studios in London. 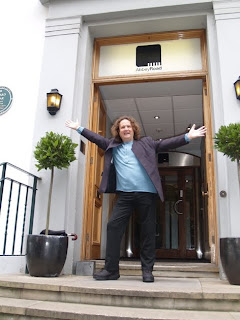 I have been boasting to the Beatle fans that I have been recording at Abbey Road with MY band that this year featured among others Ex Rolling Stone Bill Wyman, Pink Floyd Drummer Nick Mason, Ade Edmondson, Pixie Lott, Paloma Faith, Cara Dillon and the fabulous Claire Teal who you can see to great effect later this year when we are both part of the Radio 2 team for an edition of "Eggheads". (She demonstrated far greater intelligence than the rest of us old duffers despite having megabrains like Paul Gambaccini as the team captain.) There were a whole lot of other great musicians there as well as the London Gospel Choir and an orchestra of schoolchildren. As you know I have deep reservations about young people and musical instruments. It may be over 40 years ago but I can still remember the horror that was kindergarten band lessons. Mrs Hillbron would patiently explain what the notes on the blackboard were for and tell us that we were to blow, shake, clack and rattle when and only when she pointed at us. "one two three..." and all us kids just shook, blew, clacked and rattled indiscriminately.

Then of course there are recorders and violins which should not be allowed within a hundred miles of anyone under the age of 20. Although there are of course notable exceptions such as Nigel Kennedy, who if you compare the little chap on the archive footage from his time at the Yehudi Menuhin school and the virtuoso that he is now is perhaps a salutary lesson to us all : Playing a musical instrument turns you into a "Mockney". His accent changed dramatically - maybe something to do with having a bit of wood shoved under your chin for 13 hours a day for 30 years. I am not sure.

Mr B.B King! "Lucille and I'll go to the foot of our stairs."

And who is this mystery axeman? "Hi I'm Brian May from Pearly Queen and here's a track from our new album : “Boiled beef and carrots"

Arriving at the studios, I always marvel at the graffiti on the gateposts, pledging undying allegiance to the Fab Four and others. I am hoping someone has daubed "Pudsey you rawk" on there since my trip.

There are always tourists having their photograph taken on the zebra crossing outside. However, often they are standing on the wrong one as there are two fairly close to one another. 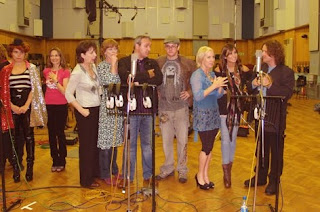 Once in the studios it was quite a wait until the recording started so time to get to know my fellow "singers" - as you may notice from the film when the song comes out if I have not ended up on the cutting room floor like I did as "Mad Patient" in one of the first episodes of "Doctors" a few years back Grrrrr. I am down at the ‘nonsingers and not very well known yet singers’ end of the line. Despite rocking back and forth on my banana shoes which also added extra height I was on the front row with the small people like Sarah Greene and Emma Pay, who gave me a copy of her cd which I played on the show as part of Lester’s Library. She is teeny tiny and a musician, singer songwriter and corporate lawyer. This means I think that she can and probably will have to sue herself at some point in the future as her career takes off.

There were also people I vaguely recognised from the teevee and a lot who I didn't. However this is not me being snooty. I was standing next to a very attractive actress from a soap - no idea who but then again she only had eyes for Lee Mead who was in the singers’ section. Behind me was Joe Pasquale yet with a voice as distinctive as his, heard not a peep.

We did several takes until the producer Adey - who looked the spit of Ade Edmonson so I found this a mite confusing - pronounced himself satisfied. The hardest part I found was that lacking coordination and not having "soul hips" as Emma Payn told me, I was unable to sing and clap in time. I felt like the monster in the film "Young Frankenstein" where he is called upon to show he is normal and not dangerous by singing and dancing with Gene Wilder in a tuxedo performing "Putting on the Ritz".

Pudsey turned up to wave along. I have met the famous bear on several occasions over the years and I swear this time he has had a little "surgery". If you were lucky enough to get to the gig in Hyde Park the other weekend where Barry Manilow among others performed for us, you may have noticed that Baz appears to have had some work done. I am not going to do any hooter related gags. Although as a member of the Manilow fan club (do they still sign all their correspondence "Manilove"?) once told me : "He has not got a big nose, he has a small face". The picture of Baz on song on our website gave him the skin tone and appearance of one of the Muppet Babies. 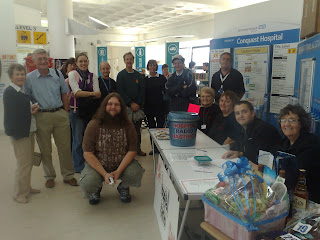 I am honoured to be an ambassador for the Hospital Radio Association so last Friday it was a flying visit to the Conquest Hospital in Hastings (This being my adopted home town, everything has to have a Harold/William/1066 spin to it.)

The volunteers had been busy doing their programmes and comforting patients with requests as well as raising the necessary funds. My job was to pick the raffle winners. Still it was a chance to meet with some nice people and I got a free cup of tea.

Also I pointed out to them that perhaps it would be a good idea to carry my show between 3 and 6 in the morning instead of their own pre-recorded voice tracked show. I like a captive audience! They promised to mention it at their next AGM. Fingers crossed.
Posted by Alex Lester at 07:11

"Also I pointed out to them that perhaps it would be a good idea to carry my show between 3 and 6 in the morning instead of their own pre-recorded voice tracked show".

OOOOH ALEX LESTER live at abbey rd ! now when,s the tour start ? lets hope its a number one then, getting lots of money for kids in need thingy ,i bet if he does a tour in a tour bus someone will BAG it ,,,
re hospital radio music does help heal and its better then sitting in bed watching the wall ,good blog alex
rock n roll moggy

So Alex, will you be the support act for Bathtub's upcoming European tour?

Are they the banana shoes in the pictures??

Am I alone in the impression painted of these famous shoes that they were to be yellow??