The walking regime continues. I am not one for map reading and compass bearings and finding routes across fields. In short I’m not made of the right stuff to be a ‘rambler’. The thought of marching across country with a ski pole, talking to Janet Street Porter fills me with abject terror. I once saw her in the old town in Hastings with Neil Tennant of the Pet Shop Boys and her then squeeze Normski. I tiptoed past. She made me nervous as she’s one of these people who always look ‘certain’.

I enjoy walking, looking in shop windows and looking at the boats when I am tow or river path walking. That will do me fine and that way it doesn't seem too serious to me. I am not intellectually rigorous enough to do ‘serious’. My sister and brother-in -law and my dad however are ‘WALKERS!’. For them it’s fields…it’s hills…it’s a long way. No prospect of them getting fed up halfway round and getting the bus home.

Decided to take the tube all the way up to Stanmore -where the Jubilee Line ends, and walk back to the rented flat. It was an overcast day but no matter. After I’d been walking for approximately half and hour I spotted a sign for the RAF Museum at Hendon. So followed the signs for a mile or so and I arrived to see a fibreglass Spitfire and Hurricane and a couple of boats. Is that all there is I thought? There were two large hangers and the all important sign: ‘Admission free’. I needed no more prompting. Entering the first building there were planes everywhere from different parts of the world and different theatres of war. 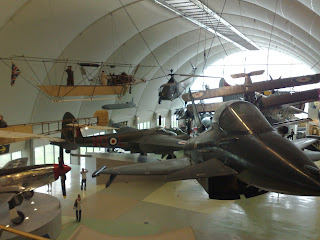 Quite a lot of interactive stuff too. So elbowing the kids aside, it is holiday time after all, and there was a diverse crowd in. I decided to have a go at being an air traffic controller. How hard could it be? Answer: Extremely. I had three goes trying to safely land a 747 and a Lear Jet. They were low on fuel. Who to get in first? I won't spoil it for you. Suffice to say I have the utmost respect for ATC be they at a tiny provincial aerodrome or Heathrow. The pressure must be indescribable. I have heard, and don't know if this is true, that they need to take 20 minutes out of every hour to have a rest in case their brains get scrambled.

Meanwhile back at the virtual airport with me in charge. By now I would expect the flames to have died down, the next of kin to have been informed and work to have started clearing the wreckage of three planes. Hundreds died and for that I can only say I am sorry; I wasn't up to the task.!

As you will know from previous blogs and listening to the show, I love reggae and a bit of a coup last week when ASWAD, (described by the MC as "The Mighty ASWAD", and I am certainly not going to disagree), hit town. They were doing a special showcase of tracks from their new album ‘City Lock’. They did explain that as it was lunchtime, they were outside of their comfort zone as they were night-owls as most musicians have to be. They may have made more than 20 albums over the years but they still have an infectious enthusiasm. They put out a single a couple of months ago which was a cover of a Howard Jones hit ‘What Is Love?’ Frankly it was disappointing, so it never made it onto the show as part of ‘Lester's Library.’ 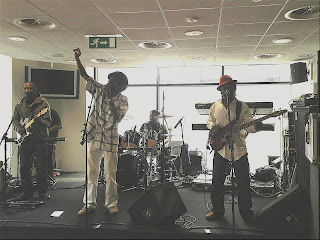 The new single ‘Calling’ is a whole lot better and a real return to form. However so fazed were they by the fact it was a lunchtime gig, they couldn't remember which of the two songs they were about to perform was in fact the single, so they introduced the wrong one.

They had thoughtfully laid on Caribbean food which looked fab, but due to "Blubber watch" I passed on it.

I know Blubberwatch has become a bit of a joke and a broken record, but I’m honestly sure that I’ve now cracked it by looking at my diet a whole lot more carefully and walking around 20 miles per week. I am extremely fortunate in that my working hours (yeah right that's work!), means that by the time I’ve had a sleep there are a couple of days a week when I don't go into the office later so I can spend them out in the fresh air.

Over the past month I have shed a stone and am now the lightest I’ve been for two years…. although I do need to lose another stone at least, before I reach roughly my target weight.

Having said that there are two concerns: 1) I don't want to end up looking like Nigel Lawson. You may remember he lost a colossal amount of weight and forever after he’s looked like a balloon you find behind the settee two weeks after the party.

2) According to many websites and manuals with a frame my size and a body my height, I should in fact weigh slightly less than air.

There are many unrealistic graphs out there making us feel inadequate. When I visited my doctor a couple of months ago for a routine health check he commented that I was: "Overweight but not obese" and " an average drinker" Woo hoo doubles...no singles all round!

Walking from the Radio 2 studios to Charing Cross station the other morning to get the train home to Hastings, I noticed this dragon nailed to a wall near the entrance to Chinatown. It’s a great part of the city with some fabulous places to eat and also some of them are still open in the wee small hours of the morning. 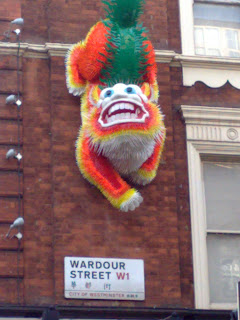 Later that day as I walked back from the station, I could hear the sound of cymbals and drums. Looking up the street I saw a crowd enthralled by a dragon doing the Chinese version of ‘The Hucklebuck’ .However I wondered if various cultures get heartily sick of some of their national symbols. Particularly the noisy ones.

Part of the British reserve is the desire for quiet. Not for us the firing of guns into the air in celebration: no dragons, no drums. So if you are British and have a headache you know that there is little that can disturb your peace on a day of celebration.......hang on I forgot the Morris Men!
Posted by Alex Lester at 23:04

Some years ago I took a (young) friend down to China Town for the Chinese New Year. We had a great time ! 2 Dragons came to the door of the restaurant where we were and we gave them food, which is what they were after. My (young) friend's face was a picture. Yes, it was noisy and lively but it was also very colourful and very atmospheric. When we (finally) had to leave the little one was boyant all the way home. It had been a lovely experience, for both of us.

Love Aswad! I agree with you about their previous single release. This morning's one was them back to 'normal'.

Given your track record over the last month, I would say that you are a "serious" walker! Has someone already invented the concept of the "Urban Rambler"? if not, you could establish (and be President of!) a whole new movement to rival Janet Street Porter's support of the Ramblers! I would definately join!

Very impressive progress on the scales!

Every thought of combining the new watch with the walking. Garmin do one which will show the time and how many miles you have walked plus your heart rate. Also the added bonus that it's such an eye catcher people won't notice the waist-line with that on your wrist, so take a look at the Garmin forerunner.
Love the shoe

great the RAF muesuem is and this year on 15th sept is a big day for the RAF ! why not take a look at R.A.F.A web site and find out more anyway i was a ATC lad and enjoyed my days with them , GET SOME IN anybody got a dvd of that show life in the RAF !!!!! lov and rock n roll moggy

Ok, I can resist commenting no more. Glad to hear the walking regime is working - don't lose too much though, there's a good chap. Just wouldn't be you. And you know we only mock Blubberwatchbecause a) you encourage it, b) we love you, and c) we think we are really funny (which we are, ha ha ha).

BTW do you have songs in your head while walking? E.g. when casually strolling, you could have "Walking to New Orleans" which would also give you a manly swagger.