IT'S A LONG WAY FROM THERE TO HERE

Bit of a quiet week last week. So emboldened by the walking and the resultant weight loss, have decided to keep at it. Despite me pontificating about humans being waterproof and not worrying about a bit of rain, it is probably a good idea to get as many miles in before the autumn is upon us.

Another bright hot sunny day so it was a walk along the towpath of the Regents Canal to Little Venice with its floating cafe packed with tourists and parents and the constant wailing of infants. One of the many reasons I have never been particularly broody.

Parents have my admiration for being able to put up with the noise their children make. Whenever I have been in relationships where there have been "step" children I am not sure I acquitted myself very well.

After a seemingly very short time I wanted to go and hide in the shed to get away from the barrage of sound. If kids came with an on/off switch that may be better. Although the temptation to leave them in the "stand by" position until their early twenties may count against me if I ever audition for the post of radio "Uncle".

Next this afternoon on the BBC Light Programme, Uncle Al says. "Shut up children everywhere!"

"It's different if they are your own.", friends tell me. I am not sure that I could take the chance. It would seem a pretty awful option for a child to have me as a Dad glaring at them and shushing them all the time.

I also consider myself "eco friendly" by not cluttering up the Earth with offspring. As I have said to Ken Bruce - who has five, or is it six : "You have had my share".

I was walking, wasn't I, when I was distracted into that diatribe by howling infants......!

See - they make it very difficult to concentrate and keep your mind on track. I headed up towards Wembley along the canal towpath with the railway and the dual carriageway for company as well as cyclists whooshing by, some ringing their bells to warn me and others just assuming that I had eyes in the back of my head.

Being a terrible dreamer and living inside myself a lot of the time I don't notice a lot of things although sometimes odd things work their way into my consciousness such as the block of flats that seemed to be held together entirely by satellite dishes. Can you remember a time when we didn't have these "luxuries"? Fewer channels to watch but less electronic clutter. 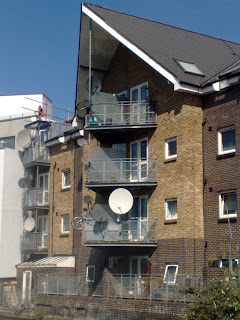 A few people were out fishing and in the sunshine and seemed unconcerned if they didn't catch anything. That must be the answer if you are an Angler. It is all about the peace and tranquility. It would I suppose defeat the object of the exercise if your blood pressure rose in frustration because you hadn't a keepnet brimming with well and truly tickled trout at the end of the day. I have mentioned this on the show before that if the fishing is going according to plan and you pass an angler, they will always wish you "good morning" no matter that it may be four in the afternoon. They are so relaxed that they have lost track of time.

I was sure it wouldn't take long and yes, the first "Michael Jackson is alive and in hiding" blurry video has been posted on YouTube.

It is nice to know that old habits never die. Although I am never sure how the conspiracy theorists make their choices.

Not heard any "Bing Crosby is alive" nor "Ted Moult spotted in Safeway" rumours lately.

However whilst not wishing to fan the flames of speculation I can tell you that Elvis is definitely alive and well as I saw him on the sundeck of a block of flats not seven days ago. Shortly after this shock sighting I found fifteen pence on the ground as well as a discarded lighter which still worked. So how many of you can boast that you spent a very pleasant four hours walking looking at boats, graffiti and roaring traffic and made a profit into the bargain! 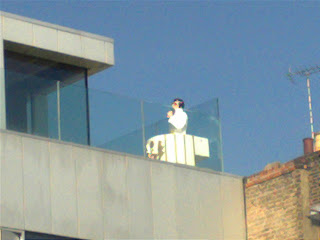 Friends are one of life's great joys and I am very blessed in having a number of lovely close friends although whether they would describe me as "lovely" is another matter. Friends also know what your likes and dislikes are. So having mentioned that, Janine and Dusan came to see me the other day with an "unbirthday" present. They had seen this and thought of me. 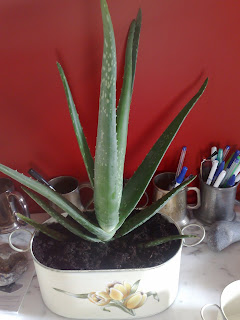 "It is an Aloe Vera plant. We know how dreadful at gardening you are but thought your house could do with an unmurderable bit of green. We also know what a rotten cook you are too so when you burn yourself yet again (I once boasted a set of Sergeant's stripes on my forearm that took several years to fade, after an abortive attempt to wrest a reluctant chicken and mushroom pie from the oven) you can just clip a bit off and rub it on the wound."

My wife swears by the use of aloe vera, personally I just swear!!

Ah those hazy days of my youth, skipping off school to spend time lazing down by the canal near Wembley. Mind you, from your pictures its gone a bit upmarket since I left there (as do most places)- it wasn't satellite dishes and erratic cyclists you had to avoid, but people throwing fridges off of their balcony. (If the lift was broken, it was the quickest way down!) Wonder how much profit was missed by looking up instead of down?

When you walk the London canals do you encounter furious throngs of Canada geese - the kind that need to do serious anger management? I frequently used to stomp down the Selly Oak to City centre stretch of the canal in Birmingham until moving to sophisticated Surrey just recently, and the pecking, poohing and hissing from gathered clumps of gooses was really quite disconcerting. I used to edge around them gingerly, scattering bits of stale Hovis in an attempt to pacify. Perhaps it's more civilised down South... Love the show and the blog. I’m one of those who tends to drift in and out of consciousness when you’re speaking, and that way it all makes perfect sense…

Your blogs are as good as your shoe - very!!

On the subject of finding money whilst walking, I do that all of the time. How much money do you reckon there might be on the floor of the UK?

MMMMMMMM PIE GREAT DJ FOOD anyone who likes alex are in a club the night pie club !! london is a pie and mash centre of the world
LOOVE THE SHOE its rock n roll in a box !

Elvis isn't dead I saw him on the Patio!