THE GOOD, THE BAD AND THE INDIFFERENT

Seems ages since I hit the town for any live music. As you know if you have read any of these blogs I have a passion for it. Although often times the artist you really want to see doesn't do your favourite song or in the case of a friend of mine who went to see Bob Dylan and Chris Rea they fiddled with the arrangements so that the songs didn't sound like they had hoped.
It is the artist’s prerogative I suppose- but to rejig the audience’s favourites does seem a little rash, if those are the tunes they we know and love. Still I have no idea how I would feel if I had to perform "Does your chewing gum lose its flavour on the bed post overnight" every evening for 40 years!

Monday evening and it was out to see Lucinda Williams. Or as my mate "Pino" says: (She is half Filipino) "Another of your ropey old country and western Muppets". She doesn't understand as she is into dance music. 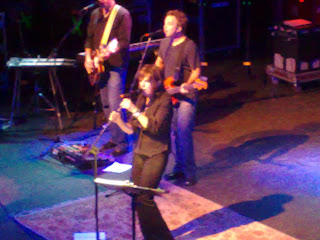 Lucinda comes from the end of the spectrum which I gather is called "Alt-Country". Not sure what this means. As you know I don't have a lot of time for music journalists however I think what the NME/Smash Hits crowd mean is that it is country music that they deem cool enough for them to be allowed to be seen listening to. The rest being just rubbish for the masses (that means us I think.)

From the moment she hit the stage there was trouble. Her body language screamed "I don't want to be here". A couple of numbers in she launched a tirade against the audience and our flash photography. "I am not an F"£$$%%^*ng fashion plate!" Then she told us she was on edge and this was not helping. Couple of false starts and then another tirade against the winking LED's as by now everyone had stopped using their camera phone flash. Incidentally I took my picture without the flash in case she reads this and suddenly turns up at my door and yells abuse through the letterbox. To be frank as much as I admire her as an artist and have a number of her albums, I was so tense waiting for the next outburst that I left after an hour.

Friend of mine "The Scottish whirlwind" phoned. So called because she is always rushing around doing stuff and she had managed to grab a couple of tickets for Booker T of MG's fame and did I want to go. I dare not refuse because she is a nanny and so like her charges you have to do as you are bidden. Plus I wanted to see the man responsible for Green Onions and Time is Tight. So it was off to the Bush Hall which is a tiny standing up type venue where I saw Dan Reed and Tony Joe White recently. Support act was Florence Rawlinson, a Mike Batt protege. (He was in the foyer sporting a very unusual hair colour). As I described her on the show when I played her single she reminds me of Joanna Lumley meets Joss Stone. She is 20 and looks great with a good voice and band. Whether that translates into sales time will tell. A middle aged bloke tottered up to me and asked "what was the name of the singer who killed herself?......I am trying to tell my companion that she was the only white singer who was any good". A little sweeping I thought but still. "Janis Joplin" "That's the one". When Booker T hit the stage he returned and said "Who's this again?." "Jimmy Smith" I chortled. 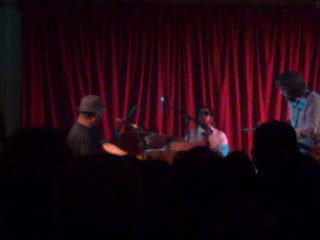 A lot of swirling Hammond has passed under the bridge since the "hits" and whilst he and the band were very enjoyable, trouble was it was sweltering in there. We were beginning to feel a bit faint and I was sweating more than Sydney Greenstreet in the "Maltese Falcon". After about half an hour of instrumentals that we didn't recognise even though he and the band got a nice groove going, a few numbers after "Green Onions", the "Whirlwind" declared that she needed some "Vocals" and so we went round the corner to the pub.

Friday and after a few weeks doing what he does Libido Boy put in an appearance. We walked from my flat to the Thames embankment and then all the way to the Tower of London where we got the river bus down to the Millennium Dome.

The river looked wonderful and there were a number of old barges plying up and down. Plus we got to see the bridge open. 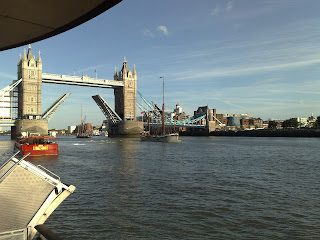 Martina McBride, despite being a massive star in the states, was over and playing the smaller venue within a venue the "O2 Indigo". We had been promised a chance to say a quick hello to her before the gig. With typical American efficiency and paranoia, there were any number of burly security staff and special stickers with "Meet and Greet" and our names on.

Along with other fan club members we were ushered backstage where we made slightly awkward small talk for a few seconds and had our photographs taken with a rather bewildered looking Martina before being ushered out again. What was good to see was the audience was made up of all ages which is a positive sign. Country is no longer for the elderly.

She seemed very nice and although the meeting was brief I did manage to tell her about you and the show and how I had done the U.S. trips and brought back a load of her stuff and other similarly mainstream country and had played it on the programme to a largely positive reaction and how that the UK is beginning to embrace the genre again hence her visit 14 years on from the first one and how her latest album was the Radio 2 album of the week and that country had suffered with a cheesy image in Britain because of those old standards like "Rose Garden". All this information tumbled out. She looked even more bewildered at this point. I had also decided to make her feel at home by going dressed as an American tourist as you can tell from the photo. 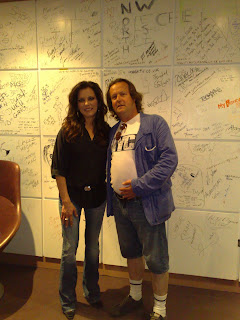 She was excellent doing not only her own stuff but also terrific covers of "Over the Rainbow" and "Hit me with your Best Stuff" which demonstrated what a great voice she has but also she slipped in a couple of "standards": "Help me make it through the night." and er..."Rose Garden"!
Posted by Alex Lester at 17:55

Gwok could really help with that outfit!

Alex, what on earth are you thinking of? Trinny & Susannah are probably sharpening their claws as we speak.

Hmmmm yes, Trinny and Susannah, I think they are threatening to come over here (across the pond) soon - gawd help us! We have Stacey and Clinton here at present - they'd have a field day with you Alex. Shall I nominate you for "the treatment" on Wot Not to Wear? Take all yer wardrobe clobber to New York, let 'em dump it all and kit you out with something kewl with the modest sum of $5,000 in your hot sticky hand? It'd get you that trip to the USA you missed this year.

I'm glad to hear country is having a come-back over there. Only problem here is that most country artists vote the wrong way (for me) and it shows in their songs quite often. :-( Probably not a fault of Martina McB though.

you forgot the Billy Bob Thornton teeth to finish the outfit, as for country music it has never gone anywhere in the States it has always been very popular!

Glad I'm not the only one who finds your outfit how shall I say peculiar. Did you get dressed in the dark Alex.

al,most of us blokes bumble into middle age with barely a thought for our appearance,then when were not paying attention we catch a glimpse of ourselves in a shop window or some fool takes a photo and the sudden realization that its us hits home with a sledgehammer blow,..this,..is such a picture!

I don't know what all the fuss is about - I reckon this ageing hippy surfer dude look could catch on (lol).

Funnier is the protective hand on stomach - are you hiding a three course meal for ten under that t-shirt?

tailendcharlie ~ I believe that is his Napoleon Bonaparte stance!

Wonderful outfit from my perspective, it's how all middle aged blokes should dress - comfort being the only sensible criteria.

Just as well you are on the wireless (and very good at at it too!) really.

You been in my wardrobe, Lester?

from uncle bagu now i know where i left my basketball