What with the texts and the Tweets and the emails and the Facebook page, there are many ways we can communicate with each and respond to the things we talk about on the show. So this blog is designed to be slightly different. 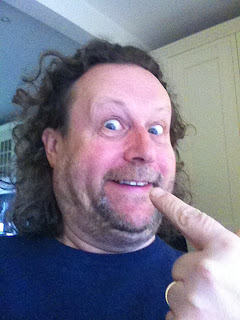 I prefer more of a dialogue and also the opportunity to fool about. More like a chat over a cup of coffee or a pint. Where we can discuss the rather bizarre night time world we inhabit.

The blog, however, is more like a personal diary. So I can tell you a little about what I've been up to if you like.

Three years ago I sort of arrived at a ready-made family when I met the Dark Lady who - in a momentary aberration - agreed to marry me. Along with her came two children who are now teenagers. Never really thought of myself as "Mr Nuclear Family". In fact, I was never really that interested in having any children. A fact that I think pained my late Mum, but we all make choices and also stuff happens as we're making plans and those choices. So maybe things don't always turn out as we expect.

So suddenly I found myself a Stepdad. Luckily for me and them and the DL they have a fully-functioning hands-on real Dad, so I don't get to do the tough parenting. I'm more of an add-on. Which is just the way I like it and it seems to work.

So last Sunday it was Jamie's 14th birthday. I've watched him grow from a bright intelligent eleven year-old who can talk for Britain and with some knowledge about pretty much anything (although if he ran out of facts he'd resort to making them up; I can see a future in politics for this boy!) to a strapping fourteen year old with a rapidly descending voice who is a keen footballer and fitness nut. He's not reached the monosyllabic knuckle dragging phase and we may be spared that (we hope).

So what did he want for his birthday?

"What kind of weights?"

So off I went to find him a set. I started out at a central London sports equipment shop.

I toiled up six flights of stairs as there were no escalators and I couldn't find the lift. 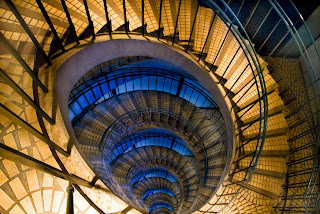 "I was told fifth"

"You was told wrong then, mate"

Back up I went.

"We don't sell ‘em mate. Only do dumbbells"

"Where are barbells sold?"

I trudged the mile to Charing Cross station. Sure enough there was the shop.

It was stuffed to the gills with gym equipment.

"Up the back mate"

Said a shaven-headed rather buff man in a Lycra singlet trackie bottoms and fancy trainers.

He eyed me with that "If its for you, buster, right shop…thirty years too late" look.

I puffed up the stairs until I found what I was looking for.

You can play soccer in the street using a bundle of tied up rags or a tin can.

"What position you play?"

Boxing. Well you just need someone's head to crack open with your fists. 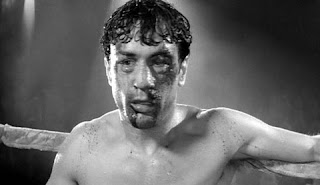 Luckily with weight training, gyms already have the gear.

I looked at the weights. The bar. The price. I think they were made of platinum with gold and diamond inlay! 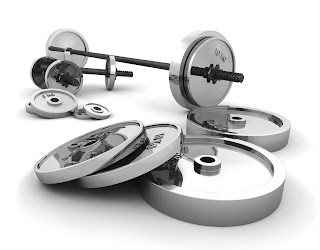 I slunk away trying to think of an excuse.

"Sorry Jamie. Due to the Olympics there's been a run on weights and there are none left."

"Er. Due to a tragic incident in America where some maniac went mad and killed his whole family when he cut the brakes on the family treadmill all private purchase of exercise equipment has been prohibited."

"Sorry. Didn't realise. You have to be eighteen before you can hold a barbell licence."

This wasn't going to wash. So the Internet directed me to a high street shop where you click and collect and the prices were considerably more realistic.

I paid. Punched in the code I was given and a short while later a wheezing youth hove into view with the goodies.

I thanked him and it took three trips to load them all into the car.

Have you ever tried to gift wrap a barbell and two boxes of weights? 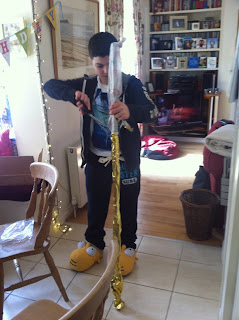 The look on his face on the day was worth all the effort.

There is only one tiny nagging thought at the back of my mind. The Dark Lady's house is tiny. So he's either going to have to exercise in the garden shed or in the living room. His bedroom is only big enough for dumbbells. If he swings round clutching his barbell he'll destroy the place.

He's fourteen and so doesn't understand the concept of "tidy".

Whose toes are going to connect with 35kg of weights at one o'clock in he morning on my way out the house?

Yes it's brings us neatly back to.... 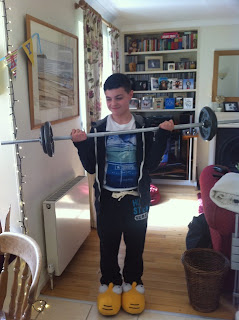 Alex & DL as a avid listener of yours along with "Ben the Stobart Driver" & McAddy of Twitter fame attempting to get onto the 440 most mornings, I for one would join you for a coffee or pint and a chat. Always wanting to learn something new and it would make a great 440 lol.

Keep up the shoe as its fantastic and all the best