Just back from the Honeymoon and a fabulous time has been had with my new wife. When I say "new" I also mean "first". Never been in this position before. Somehow despite having been in relationships with some terrific women over the years never really felt that they were "the one". When the Dark Lady came along I was toast very quickly so just over a year ago whilst watching the skating at Bryant Park in New York I popped the question. Thankfully she said yes burst into tears and spilled coffee down her front. 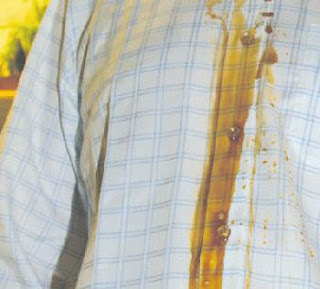 The plans had been made the day was nearly upon us just a few last minute things to do before the very very big day. Was I nervous? No. Was I tense? No...ACTUALLY THAT IS A LIE YES VERY TENSE!!!!!!

Would we manage to get it all done and would it go smoothly?

On the Friday there was to be a lot of too-ing and fro-ing from London and Hastings with guests arriving from as far afield as Chicago to take part in the happy event.

DL had been organising with some help from me seating plans. Menu. Decorations with all the colours matching and a lengthy document explaining who had to be doing what where with whom at a particular time. A bit like "Cluedo" but with hopefully fewer murders.

The idea behind the list was to smooth the path of the day so that Bride and Groom could enjoy it without enormous worry that things wouldn't happen when they were supposed to. As one of my Best Men remarked upon receiving the sealed orders.

"This is excellent I don't have to worry too much about my part in proceedings as most of the information seems to be about the placing of the candles. Traditional and battery powered. We'd hired a lot of artificial candles as the Town Hall in Rye is a spectacular old building and if it burned down we'd never be able to show our faces in town again. 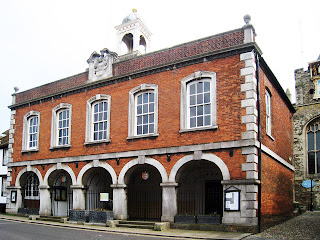 One Bride was so concerned about her big day and things going wrong that she forgot one vital thing: To enjoy it and had a horrible wedding as a result.

Little problems began to surface. My family was going to be crammed in to my house so beds had to be made up including a sofa bed that I had bought. My poor Auntie Daphne drew that particular short straw. I rushed around the house on the Thursday afternoon and the Friday tidying and making up beds. When I say making up beds that is when the first brain failure occurred. I can't put Duvet's on without crawling inside the cover. Purple faced and sweating I looked around for pillows. Erm I had the pillow cases and the sheets and the duvet covers and the beds but not nearly enough pillows so had to rush up to ASDA to buy some more. Just as the first members of my family arrived.

Another and rather more important problem had occurred as well. Being greedy and having so many lovely friends that in many cases go back to school and College days I was unable to choose a single Best Man. So I was lucky in that two friends agreed to do the job. Clive who I have known since about 1975 and Simon AKA "Libido Boy" who has been a wonderful friends since we were 14. He drives Clive doesn't so he agreed to hurry down from his home in Leicester in order to help me move stuff to and from the venue the ancient Mermaid Inn in Rye. East Sussex. 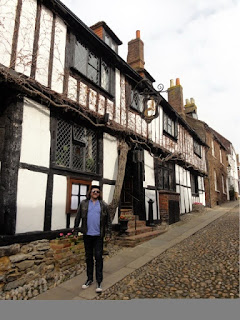 Everything had to be in place as a few of the guests were turning up for things on sticks and a few drinks about 7pm on the Friday.

The plan was Simon would help me deliver everything to the Mermaid. Drop my suitcase off at the hotel where I was staying that night. Park his car in the car park next to that of the Dark Lady. My car would be left at home so on the Sunday bright and early DL would drive me in her car to the airport for the Honeymoon. Leaving Simon, Clive and the DL's friend and helper Nisha to clear up.

As the Friday wore on I began to receive increasingly agitated phone calls from Simon. He was still more than 100 miles away and it was approaching 5pm. He had bought a new Sat Nav which had decided to show him the scenic route with the most congestion on the pretext of removing him from the motorways and main roads and its allied congestion.

I then had to leave my family at home whilst I made several journey's to and from Rye in my car containing lanterns and candles and jackets and suitcases and gifts for the Groomsmen. The Bridesmaid and others.

I was a husk by the time I arrived for the drinks at the Mermaid just as Simon arrived with a worried look on his face after a journey that had taken him nearly 7 hours.

By the time we had had a couple of pints and some chips in the Lounge that had been reserved for us. Everything seemed a lot rosier. Although the Dark Ladys' daughter Ella wasn't quite so keen when she discovered that the Mermaid has the reputation of being one of the most haunted buildings in the UK. Still this wasn't going to bother me as I was staying some place else. It would be a quiet untroubled night for me. 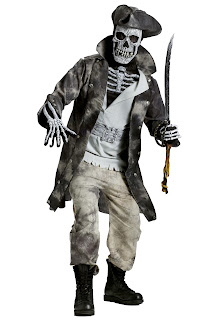 Sounds like it was all a bit exhausting Alex. As for putting on duvet covers - just think yourself lucky you've never had to attempt it with PMS! Huge fight with duvet ensues which always results in me inside the cover!