Busy week as it was time for another "Nerd Night". I have mentioned these in the past as this is when DJs from the radio industry get together to talk jingles, bloopers, donuts, day parts and "throwing forward", all of which - you will have noted by listening to the Best Time of the Day Show - I have not mastered in 33 years at the turntables.

For some unaccountable reason, women seem to be in short supply on these nights out. There are quite a number of women broadcasters and yet they always seem to be washing their hair the night the Nerds sweep into town. 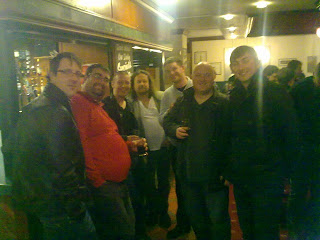 Had not done any organisation for the do myself other than trying to work out whether to drive or go by train. This was dependent on how the Dark Lady was feeling after her neck operation from a few weeks back. She is in pretty good shape now with most of the pain gone, although her left arm is still a little weak and her voice is still wheezy. Although, in order to keep the peace, I have stopped laughing at it now. (Wow guys I am such a catch!!)

In the end I elected to go by train. This was a rather uncomfortable and horribly expensive mistake. An off-peak walk-up return ticket London to York was an eye-watering £103.

What compounded the felony was the total lack of available seating. So yours truly spent almost three hours sitting on the floor at the blunt end of the train. Every so often having my toes would be run over by the buffet trolley driven by a poor bloke who had to spend his life negotiating luggage, sprawling legs, toddlers left to roam by uncaring parents and some bloke parked grumpily and plumply slap bang in the middle of the trolley turning circle at the blunt end of the train!

Got to York and had a monumental wait for a taxi to take me to the hotel where I was going to meet the rest of the gang. As is usual on these occasions, this is about the time of the day when the "regrets" start to arrive.

"Sorry can't make it after all, there's been a birth/death/illness in the family"

This time, however, there were a few recession based excuses that I can fully understand, particularly when

you take into account the parlous state of the British radio industry these days.

"Sorry can't make it, been told I have to work a double shift/been fired/broke"

Also there was the usual...

On this occasion the curator didn't come either (she being a woman, the "she" is a giveaway I think). This

reminded me of a friends 21st birthday when we were students. We arranged to meet in a pub and he never turned up as "he didn't feel like it". So that just left poor Charlie Jordan on the woman front for this Nerd Night. She is used to this stuff by now. Charlie is very highly regarded, not only for her talent and professionalism, but also the fact is she is always great company.

I can still remember working in darkest Yorkshire back in the very early 80's when the bloke in charge of the radio station referred to one of the women staff as "an honorary bloke". Being a PC person (well, I try....."phwooar look at the ti....." STOP IT ALEX) with hindsight it should really have been the other way round as she went on to become a very senior person at the BBC in Ulster and he....disappeared. 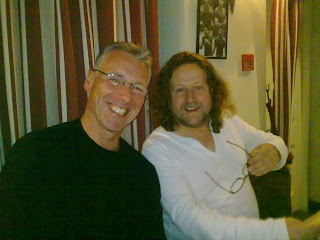 It was great to catch up with the usual gang and also see some new faces there, including Jules Bellerby who was a colleague of mine from 25 years back. He tells me he has a picture of us in those days in the attic. All his own hair and teeth (although I was gratified to note it was greying at the temples).

"Where's Julia?" Julia is his wife of many years and also a seasoned broadcaster in her own right.

"She didn't think she was invited."

She was no mug as I recall from the mid 80's. Obviously deciding an evening in front of the TV was infinitely preferable to jingle chat. 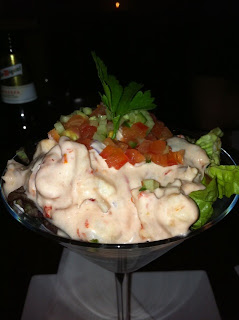 Beer, restaurant, then the standard trudge round the city to find the hotel where we could have a few more beers. The restaurant staff sent us the wrong way despite the protestations of my god son Michael, who is training to become an airline pilot, so was a dab hand with the sat nav in his phone.

In the end, Mathew Rudd decided that it was worth a chance dropping into a hotel we were passing to ask. His persuasive, smooth DJ patter reaped the expected dividend and 16 slightly tipsy blokes and one sober woman were invited in to drink beer and talk about donuts, music beds and "throwing forward". Until the bar shut at 2am.

The following morning it was back on the train for 11-ish. This time it was bliss (sort of); a seat (although the table was awash with stale beer and soggy newspapers). Not wishing to stereotype, however, but the train had just come down from Scotland via Newcastle.

Back into London to link up with the Dark Lady in time to jet off to Hemel Hempstead (home of the famous "Box 14" 35mm Kodak, film fans) in order to go to the pub to meet her mate Brian for his 50th Birthday. There was a cracking band and excellent food and a cake in the colours of Queen Park Rangers. (I had that last bit explained to me). Chatted with friends of the Dark Lady old and new. One slight hiccup when a woman asked me what time my show was.

"2 til 5 in the morning?? No-one's listening. Everyone's asleep!" she opined. She was obviously a "light" so had no understanding of the real world. So I let her off. Although mentally I was shovelling earth on her dismembered corpse.

Another late night but a lot of fun and Brian's Dad attempted to explain fly fishing to me.

From what I gather you spend a lot of time out in the cold and drizzle drinking beer and wine and eating sandwiches.

On the subject of fish he said, segueing neatly (ah segues - we are back at Nerd Night again), to the following, when I was dispatched back to the rental flat with my luggage which now had the added bonus of containing two helpings of the DL's famed and excellent fish pie.

When I got back I discovered that there had been some leakage and so my clothes, bag and computer were soaked in fish pie juice. 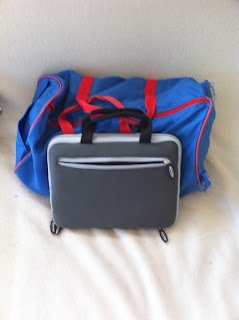 It's a devil to get cod stains out you know. It also sets up quite a stench. So next time I go to a coffee shop or a library to use their Wi-Fi you will know it's me as I will be the bloke surrounded by cats.

On the Monday it was up to see my Dad, Sister and Brother-in-Law, John. It was his birthday at the beginning of the month so it was a chance to catch up and give him his present: a travellers' wallet. He is retired and my Sister is following suit in the new year, so maybe they will get more time to travel!

Dad, meanwhile, had been busy making stuff in the garage. I am still scarred by the wooden Spirograph he constructed for me when I was eight. At that age you want what all your mates have got. The store-bought stuff. Now I am immensely proud of him for his carpentry talents and wouldn't swap it for anything. Having said that there is a certain "Boy Named Sue" quality about it.

Obviously buoyed by the success of this, more than forty years on he has built a "Harmonograph". This apparently was all the rage in Victorian times. The paper is placed on a moving deck which is operated by a pendulum and the pen is attached to an arm which moves in a different direction via another pendulum. 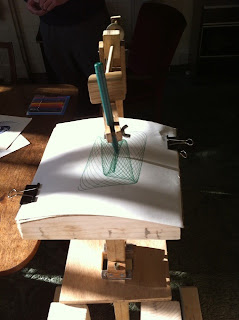 Now you know where I get it from.

Am away next week as the Dark Lady and I are off to New York for a few days ....I have a few surprises up my sleeve. I shall report back. In the meantime, make Tim Smith as welcome as you always do as he is holding the fort. Supported by Dr Strangelove and his wide variety of hats.

While I am away, if you are pining for my the sound of my manly tones, don't forget you can hear my latest Audioboo, in which Dr. Strangelove puts forward those tricky questions you have asked (such as "what do you watch on the telly?") You can log onto Audioboo by clicking here. With the same login, you can also follow me on Twitter, and get the lowdown on The Adventures of Alex, as and when events happen.

And while I am away keep those suggestions for Listener's Library coming in. As it is the festive season approaching you may want a nice Christmas tune with jingle bells on, or to make a nice Christmas dedication...or to completely hijack the whole thing with some heavy rock anthem or an MC Hammer song. We are a broad church so all suggestions welcome. Visit here to submit your request.

Hope you are enjoying your time in the Big Apple, Tim is looking after us very well.