I GOT THE MUSIC IN ME

Been looking forward to this for ages. The Dark Lady had bought tickets for Willie Nelson as a birthday present. I had seen him a couple of years before and he was fabulous. How would the intervening 24 months have affected him? He is 77 years of age and so you do worry about deterioration in your idols. What if his voice was shot? What if he couldn’t play his guitar as well? What if he came over as an elderly shuffling shadow of his former glory??
We needn’t have worried. If anything his voice is in better shape than it was on the previous outing. It is an idiosyncratic sound that you either love or hate. We love him and his guitar playing was as good as ever. He still did the whole “Django Reinhardt instrumental" thing. Often with extended soloing in other songs. As I was a lot closer to the stage this time I was able to get a closer look at the great man. I knew his guitar (Celled “Trigger” apparently) was beat up but I never realised it had a hole worn through the soundboard due to years of thrashing.
He spoke little but played a lot. I lost count of the number songs he crammed into his 90 minute set.
Though he did do “Crazy”, “Funny How Time Slips Away”, “On the Road Again” and “City of New Orleans”; just a few of my favourites. I counted the other day that I have 22 Willie albums and am only scratching the surface. When he launched into a fabulous low key version of “Georgia”, there was an audible gasp of pleasure from the DL and I thought she was going to weep with joy. 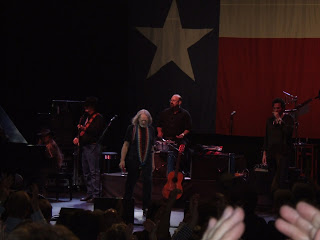 It was all over by 9.30pm so we hopped in the car and drove home. It was going to be a week of great music.
Man cannot live by tunes alone. So on Saturday we popped in to the pub for a quick one and drank it outside as the weather was dry and warm. Stayed to watch the opening minutes of the England v USA world cup match. I am not a fan but the DL is and can explain the offside rule to me. I still haven’t grasped it as my mind wanders very easily.
My sister and brother-in-law were watching at their place on their HD TV. Apparently the England goal was missed due to a glitch. My normally mild-mannered Brother-in-Law was so furious that apparently he “threw his slipper to the floor with great force”. When we got home it was obvious that the Dark Lady would rather watch the football. So I left her shrieking at the box whilst I “pinnied up” and got on with the serious task of preparing the food (opening the packets for the cold collation and washing the salad.) I also spent some time putting up the fairy lights. I may not be much of a cook but I like to think I am OK with presentation. 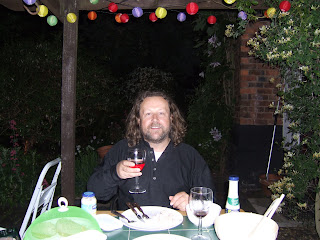 Monday evening it was to the BBC for a special concert featuring Jack Johnson. I have played him on the radio dozens of time and like his work. He was excellent although I began to think about halfway through that it was all sounding a tad “similar”. Some acts have enough light and shade to sustain the interest not sure that Jack has judging by his set. 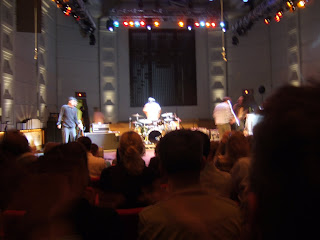 I have been wrestling with my mobile phone all week as it has had a catastrophic software meltdown which means it has lost nearly all the data, all the sound clips and all the photographs. A quick peek at the internet revealed that it was a common problem and many have been returned by disgruntled owners. So off I went to the shop ready for a battle.
“This phone is rubbish”
“Yes we know. Would you like a replacement?”
“I’m not having the same one like you tried last time, I want a replacement”
“No just go choose a phone and we will regard it as an upgrade”
“Wow uh uh? You are not going to try and fob me off?”
“Nope, choose a phone let the guy at customer services know and we will pop one in the post” Currently waiting for final instructions so hopefully by next week will have a new phone. 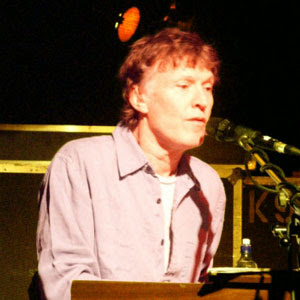 Thursday night it was time for some more music and off to the famed BBC Maida Vale studios for Steve Winwood.
Last time I was there was for Bonnie Raitt about five years ago. I had to stand. This time there were little tables complete with an electric candle to give it “atmosphere”. We shared a table with a big BBC cheese and singer Ruby Turner. It was a really intimate gig reckon fewer than 100 people were there and it was an instrumental and vocal feast. Steve looked and sounded in great shape. Working through extended versions of some of his finest moments such as “Higher Love", "Gimme Some Lovin'" and "I’m a Man”. He paused at one moment as a technical problem with his Hammond Organ was bothering him. We marvelled at the ability of one man to sing, play the keyboard with two hands, and also the bass parts with his feet. Who says blokes can’t multi-task?
“Its like having a 60’s car” he explained. It must be tricky relying on ancient equipment. Just as well he didn’t have a Mellotron. I gather they were hard work when they were new, let alone nearly 40 years down the line. During many songs we were treated to impromptu backing vocals by Ruby as she could scarcely contain her delight. As a white, middle-aged, middle class man, not known for being particularly “hip”, I would say it was a “funky” evening.
I will now drag myself away from the keyboard crimson faced with embarrassment after that remark, feeling like a Vicar with a guitar or a politician talking to Radio One’s Newsbeat about their favourite bands.
Posted by Alex Lester at 09:58

I too anticipated the Willie Nelson concert with great enthusiasm and as the flag of the Lone Star State unfurled to set the scene - I just knew it was going to be an exceptional treat!

Though I didn't have such a close view, I could see how "used" his guitar was and could hardly believe the music he was able to produce!

As he started to play City of New Orleans, I immediately thought of your audioboo of the train - and now the two are now inextricably linked in my mind.

Georgia on My Mind was superb and it must have been all the more special for you both having driven through the state of Georgia so recently.

I'm so pleased to have been there.

Best collection of ringtones
Hi everybody!
Do you feel the ringtone of your cell phone is boring? Want to own a fun and unique ringtone on your phone? I would recommend you to list the best ringtones for mobile phones, you can consider downloading your phone.

There are also many other ringtones. All ringtones are free to download. You can see more at: https://bestringtonesfree.net/