WE ARE THE WORLD

After the rip snorting hog whimpering "success" of last week’s Children in Need singathon at the legendary Abbey Road studios with an all star cast, plus me and my banana shoes proving unable to sing and clap at the same time, it was on with my musical career this week.

I have been pondering this lack of coordination over the past few days and feel that it is not too shaming an admission. After all B.B King says he is unable to sing and play guitar at the same time. I have sat in the audience on several occasions over the years and have been thoroughly entertained seeing him just, er, not do that!

There are probably lots of other examples of musicians, sportsmen and artists unable to multitask.

Trouble is I am unable to think of any other ones just at the moment. I can make some up if you like:

Hmmm: Premier league footballers unable to run and spit at the same time?

Minor Royals unable to be Royal and hold down a worthwhile job?

Politicians incapable of appearing in or on any media outlet and tell the unvarnished truth?

Texans find it difficult to walk and talk at the same time? "Ah said 'howdy neighbour' and my legs jes kinda collapsed" said Barton K Finkelhiemer III from a sitting position outside his home in Dallas.


So the big news this week music fans was that I was back in the studio once more laying down a track for my "hit" album. Well in truth the TOGS have kindly invited me to contribute another hot ditty for this year’s "Bandaged" album which is going to be a 2 CD set, I have been informed.

A list of tunes for tiny tots was sent and after some consideration I plumped for "The Runaway Train".

The question: Was it going to be more difficult than last year’s "triumph" when I murdered "My Bruvver"?


As last time, a backing track and the lyrics were provided and I spent some minutes purple faced with embarrassment in the rented flat of a morning rehearsing and hoping that my singing would be inaudible to my neighbours.

No one has been giving me funny looks as I emerged from the lift at 01.45am each morning so I may have gotten away with it.

Sorry about that. An Americanism just crept into that last sentence causing my legs to collapse from under me for some reason. 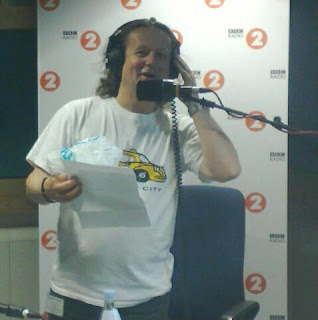 The big day came and not Abbey Road this time nor any of the famous and iconic studios around the globe.

I quite fancy the idea of laying down some tracks at Tuff Gong with Bob Marley in Jamaica – or Hitsville in Detroit or even Chateau d’Herouville in France. Instead the rather mundane surroundings of the Radio 2 building not far from Broadcasting House beckoned.

Phil Hughes who is a senior executive, CIN go-between and all round fixer was the engineer on the session. Now there is a man who can multitask!

I have known Phil for such a long time now that I know as far as my singing efforts and my radio presenting efforts are concerned he is beyond shock.

He can also keep a diplomatically straight face - something teachers and parents presumably must master as their little charges attempt their first faltering attempts at musicianship and comedy.

Now a seasoned pro having done two songs for Children in Need I know what side of the recording spectrum I am on.

Forget spending a year in the studio putting down tracks and blowing the advance from the record company. I am more the early days of recording type.

In the studio, two run throughs and cut the third straight onto the disc. I could have been a rock n roller or in a 60's beat group (No offence to Phil but George Martin could have produced). Or maybe I could have been a 30's blues man recording 6 sides in an afternoon in a hotel room in Knoxville. So speedy were we this time.

However despite the rather retro feel to the recording there is one thing for which I am eternally grateful: The "acetate" is then sent off to another studio where it is "auto tuned" and generally fiddled with in a 21st century stylee by the record’s overall producer so that when it eventually reaches this year’s album it won't sound like the thin reedy out of tune and out of time voice on the original.

Apparently this happens quite a lot. Without naming names it is all down to multi tasking. It is very difficult to sing, dance and look good in the video all at the same time.

Another thing I love about being a "musician" (see how I am getting ideas already) is the rock and roll lifestyle..... 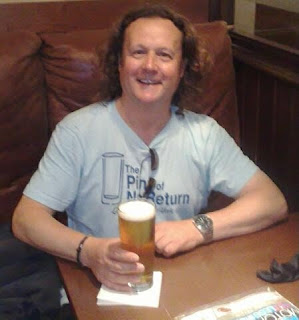 In order to look like a rock star you need to wear those sunglasses.

now your face in the beer photo,..i would say this is pint number three,just starting to get that 'im starting to enjoy meself,..an' im gonna enjoy meself a good bit more,tha nose'its at this time when the regional accent should start to surface,try saying 'dudley' after this one and it should sound like 'douldlay'if im not very much mistaken!...

Hmmmm - well, I wonder if the 21st century stylists fiddling with your original will bring forth something all echo-y/echoey? (sp?) as heard on many recent pop recordings? A "Killers" version of "The Runaway Train", all weird and wonderful would be a sound for sore ears alright! :-O
Nice portait btw...feeling no pain ?

So, is that your new watch Alex?