Back over to France last weekend to see how my friend the Widow Edith was faring with her second knee replacement. The answer is: "Getting there slowly with some nerve pain up her thigh" Her car was missing so in my halting French I asked if she was still too unwell to drive and so was it at her sons house? "Its dead" came the stark reply. No idea what sort of vehicle it was but she has had it all the time I have known her which is getting on for 20 years. I think it was some sort of French vehicle that never made it over here. We will call it a "Citroen Parnassus".
Hmmm there could be an alternative career in this inventing names for cars. How hard can it be? We all know of the times that motor manufacturers have cocked it up and somehow ended up marketing an offensive car. Then again that could also be a good earner too. Why not market the name badges with a "difference"? They would be a must have for lairy blokes who have been pimping their rides. Instead of having to scream around the estate after dark in a feeble Vauxhall Nova (doesn't that mean "won't go" in Spanish?) with the thudding drum and bass soundtrack. Spinners, stripes a whippy aerial and a little pair of football boots hanging from the rear view mirror. All well and good but to top it off and be cock of the walk you need the sign on the back which reads "Vauxhall B*%""*$ks". Perfection!
Back to Edith. Her son is currently sourcing a new car for her. Can't wait to find out what it is. I like to think that this 75 year old woman will probably be driving round in a disgustingly offensive car any time now.
Took the tunnel over and the ferry back as I did last time. That way I get to my destination three or four hours earlier than I would just by taking the ferry. On the way out by tunnel for a second time no one looked at my passport.
On the way back through Portsmouth I was behind a large pack of motorcyclists. They approached the passport control handed over their documents didn't remove their helmets and were waved through. I thought it would be like a bank or an office. They have signs on the doors saying "Please removed helmets before entering". I asked on the show why this was and your reply was that their passport photos probably had pictures of them in their helmets! Not sure that is entirely accurate but it is a view!
Bit of rain but was able to do a bit of sightseeing and stopped off in a small town and there was the ultimate slacker vending machine. This offered 24/7 hole in the wall pizza. However being France this was just the name of the machine as it wasn't working. Rather like the supermarket chain "Huit a Huit" 8 til 8. Which closes for two hours at lunchtime and is never open on Sundays. You've got to like their attitude sometimes. A rough translation being "Le bloody mindedness". 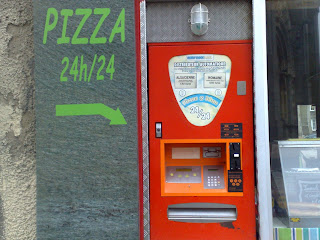 Sunday morning woke early and felt rather erm "odd". A visit to the bathroom soon told me all was not well in the internal economy. Got to the afternoon ferry and went to bed and for the next 6 hours felt very grim achy and unable to sleep. This was a bit of a blow as we docked at 9.30pm and so didn't arrive back at the rented flat in London until close to midnight. This gave me under 2 hours in bed there. Normally this is not a problem as I am sufficiently rested to do the show then head back to bed.
The programme staggered through with me rushing to the khazi every few minutes. (a 4 minute record is sufficient, dysentery fans).
Then I had to take my companion back home to the Midlands, go see my Dad, leave the car and hop on the train to London as I was due to meet up with my concert-going school friend, the now legendary Libido Boy. We were off to see P.J Harvey. I felt so grim that I handed the tickets over and said "tell me about it tomorrow" and went to bed.
Slept like I had been clumped over the head with a baseball bat and woke up feeling more or less 100% the following morning. This has not stopped Richard Allinson referring to me as "Thunder pants" every day this week as he does a fine job sitting in for Sarah Kennedy.
Went back after the show to find Libido boy awake and keen to tell me about the night he had. "She's really sexy". So you enjoyed the gig then? What songs did she play? "She had on this white dress". Did she concentrate on new material or were there a lot of our favourites in there? "She had this silver thing in her hair and looked gorgeous". You can see the way things were going. I went back to bed and when I awoke the boy had gone and left me with a picture. 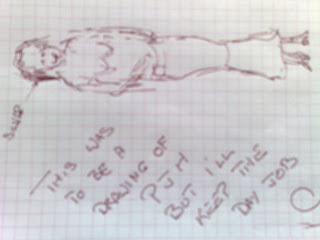 As producer Andy Warrell noted looking at the picture and knowing that Libido Boy is involved in the leather and shoe trade :

"He draws shoes rather well".

All is now normal in the world of Alex Lester and his internal economy. His teeth are OK too. Annual check up due last Wednesday. I am fortunate in that I have an NHS dentist!!!!!!!
When I arrived I nearly knocked the choppers out of a tiny little old lady who was hovering inside the waiting room about to leave as I flung the door open. The handle was nearly at gum level. "Ooops nearly knocked your teeth out. Still, you are in the right place for repairs" I yocked. She eyed me coldly and said: "Are you the taxi man"?
The credit crunch has obviously worked its way up to Dentists. For the first time in three years of visiting this particular bloke he remarked on my old amalgam fillings. "you want those replacing for cosmetic reasons?" Naah they are fine I think. "We've a special offer on".
Posted by Alex Lester at 07:44

IF IN FUTURE THIS MAY OCCUR AGAIN WHY NOT PLAY A TRACK FROM THE EARLY YEARS OF GENESIS,PINK FLOYD,MIKE OLDFIELD etc etc. THEN YOU HAVE ENOUGH TIME TO START THE TRACK,NIP OUT AND DO WHAT YOU HAVE TO DO,HAVE A CUP OF WATER,DISCUSS WITH YOUR PRODUCER ANY ISSUES GET BACK IN AND THE TRACK WILL STILL HAVE CONSIDERABLE TIME LEFT TO PLAY, THEREFORE NO ONE WILL NOTICE