'WELL HERE IT IS MERRY CHRISTMAS'

Been a busy couple of weeks, although there’s still been time for fun. Last ‘Nerd Night of 2008’ saw the usual gang in Leeds, although we did pick up a few stragglers on the way. 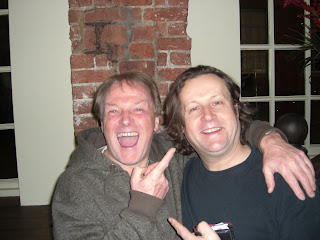 We’re thinking of concocting a cruel and unusual punishment for people who swear that they will be at these do's. "Count me in”. “I’m THERE". Then they phone up on the day with the usual lame excuses. I’m not sure, but I think someone tried to claim that the dog had eaten their homework, so they would be unable to make it after all. I expect they had a better offer. We should have confronted and shamed them in the local branch of ‘Spearmint Rhino’ later in the evening. You know who you are!

I think the best idea would be if we all suggested they had a big birthday party, or maybe we were going to honour their contribution to the world of ‘TV and Radio’, and then none of us turn up. That'll larn 'em! A friend of mine had a similar view on his 21st birthday a long time ago. We all arranged to meet in the pub and he never showed. "Didn't feel like it" was his rather feeble excuse.

It also gave me the opportunity to catch up with an old colleague. When I say ‘old’ I’m not sure what she is on but I want some of it. Christa Ackroyd is a legendary figure in Yorkshire having anchored the regional TV current affairs magazine show ‘Look North’ for many years and before that YTV's ‘Calendar’, as I recall. We worked together briefly on a doomed commercial radio station in the early 80's. I was "let go" after 18 months as were most of the management and she assumed command. I’d not set eyes on her for 25 years and yet she looked exactly the same. She must have a picture in the attic a la Dorian Grey.

The evening started in the pub and ended in a hotel bar, which was not the one we were staying in. Ours was a budget jobbie with no such facilities. It was quarter to three in the morning when I turned the light out after another top evening. 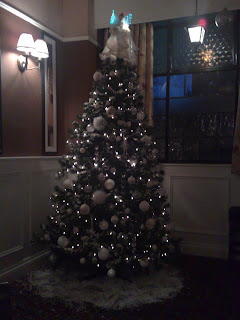 Apart from this highlight, much of the last few days has been spent doing Christmas chores. In other words getting gifts and sending cards. I was ahead of myself this year posting the cards, so was able to send them second class, which in these recession hit times saved a few pence.

We’ve abandoned any pretence at ‘surprise’ in our now rather reduced immediate family as we have decided that life is too busy and too short. Everyone says what they would like and we go out and get it. I managed to get everything fairly easily, although the only gift that was proving tricky was mine. A pair of shoes. This is a pull together of birthday and Christmas as I didn't get round to thinking what I wanted last May. So it has been a present ‘rollover’. In the end, my sister sent me a festive bag to pop ‘em in. All I have to do now is to ferry them to her house on the big day and feign surprise and delight when I unwrap them!

My Aunt and I have sent each other identical gift tokens. Now I think I may have made a killing this year as I sent hers second class post and she sent mine first class! It’s the little things you understand.

I am also ‘cheese monitor’. It’s my job to turn up on Christmas morning armed with cheese biscuits and a selection of appropriate dairy goods. As you may remember I was in France a couple of weeks ago. Bought a nice Camembert with a consume by date of 28th December. It is going to be molten in the middle and so ripe that it will have to be left out in the garden.
It has been in the boot of my car since Sunday 21st so on the 24th, as I head up to the Midlands, I will have to be like a dog in a vehicle. Head out of the window tongue flapping in the breeze due to the awful stench. 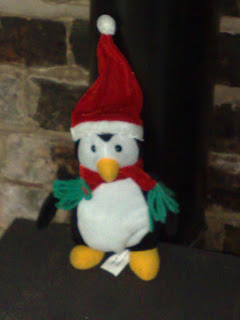 It has been an interesting and in some ways unusual year which I will refer to in greater detail in my next blog.
It only remains to thank you for all your kind comments and cards and wish you a very Happy Christmas and a solvent New Year
Posted by Alex Lester at 18:35


Have a good one!

Interesting and unusual year? Do tell. I could say the very same thing for mine.

It was good to hear you filling in for Terry this morn. You'd be the right one to take over when he retires - very similar approach, much more so than any other stand-in I've heard. More fun too! Go for it!!

I agree with Twilight, I really enjoyed your sit-in-for-Terry show on the 2nd. Having said that, I would hate to lose you on the Best Time of the Day Show!

Hey! The BBC have been exploiting you a bit lately methinks... I could listen to you all day, but you have a life and your health to look out for.